NOTE:  Today, December 5th, at 11 pm, the Brian Lehrer Show on WNYC will feature Team Member James Addison talking about the “Sacred Shelter.” Tune in at WNYC 93.9 FM or WNYC AM 820. 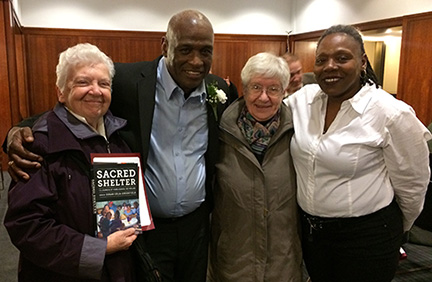 The room was full, standing room only, with an estimated 200 people attending the launch. The crowd was welcomed by the president of Fordham University, Fr. Joseph M. McShane, S.J., and Director of Catholic Charities, Msgr. Kevin Sullivan. Rabbi Jeremy Kalmanofsky offered an opening prayer. The editor of the book, Susan Greenfield,  acknowledged all that helped with the book, and thanked the thirteen people who so willingly shared their life’s journeys in the book.

LEFSA team member James Addison took part in a 30-minute dialogue, along with Dennis Barton and Michelle Riddle. The three have also shared their stories in the book. During the dialogue, the three panelists talked about their experiences of sharing their stories for the book, the difficulties and joys of the process, as well as commenting on some parts of the stories that are included in the book. They talked about their journeys and the healing that took place, and mentioned some of the things that helped them while they were still homeless, the encouragement that they received, and good people they have met along the way.

The entire LEFSA team was present at the event, as well as Sr. Charlotte Raftery, SC, and Sr. Mary McCormick, SC.

Books were available for purchase during the event. It may also be purchased at Fordham University Press https://www.fordhampress.com/9780823281190/sacred-shelter/, Barnes and Noble : https://www.barnesandnoble.com/w/sacred-shelter-susan-greenfield/1128941682, and Amazon: https://www.amazon.com/Sacred-Shelter-Thirteen-Journeys-Homelessness/dp/0823281191/ref=sr_1_1?ie=UTF8&qid=1541095353&sr=8-1&keywords=sacred+shelter