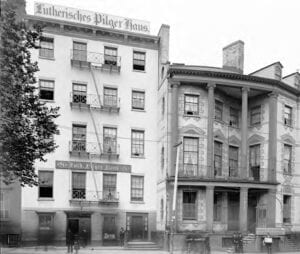 By 1860, a five-story building stood where the Seton’s brick home had been.

In May 1801, William Magee Seton rented a stately brick house at 8 State Street, formerly occupied by a friend of Dr. Richard Bayley, Elizabeth’s father. This move was fortunate but not preferential. Difficult financial circumstances had recently forced the sale of Elizabeth and William’s home on Stone Street. Yet the Setons remained within the bounds of recognized gentility in this wealthy neighborhood. The recently constructed houses were on filled-in land facing the Battery. At the time, Elizabeth wrote to her friend Julia Scott, “We move in May to the Battery next door to Carey Ludlow’s house [9 State Street] which is now a lodging house….” (1) Their other neighbor, at 7 State Street, was James Watson, a wealthy merchant. He occupied a Federal-style row house built in 1793 and extended in 1806. At this location, merchants William Seton and James Watson chose to live within the New York harbor view in proximity to their shipping interests.

On August 19, 1802, Rebecca, the Setons’ last child, was born in the State Street house. One year later, because of bankruptcy, the Setons left their New York home and sailed for Italy on October 2, 1803. The voyage further devastated William’s declining health; he died in Pisa on December 27, 1803. 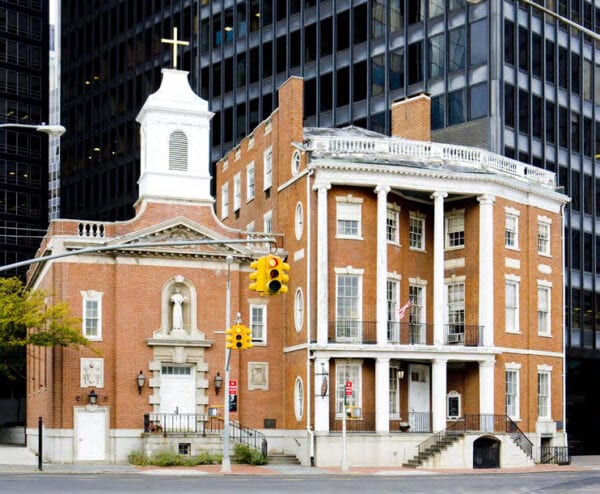 After returning to New York as a widow, Elizabeth lived in New York City until she could no longer support her children. On June 9, 1808, Elizabeth and her three daughters sailed to Baltimore from Battery Park through New York Bay. She reflected upon this melancholy departure in a letter written on January 30, 1809. “I saw once more the windows of State Street…can a heart swell so high and not burst?” (2)

In the early 1960s, the building at 8 State Street was torn down, replaced in 1964 by the Church of Our Lady of the Rosary. The adjacent former James Watson house, a New York City landmark listed on the National Register of Historic Places, was renovated to become the Rectory of the Shrine of St. Elizabeth Ann Bayley Seton, named after the first American-born canonized saint. Today, the Shrine is towered over by modern construction.

State Street today approximates the original shoreline prior to landfill expansion. The short street in the Financial District of Manhattan extends from Water Street to Whitehall Street, bordered by Battery Park at its eastern border and terminates at the northeast corner of the park at Bowling Green. 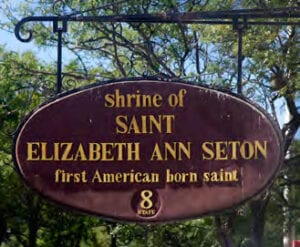 Although a contemporary building, the Shrine church was designed in the Georgian Style to match the adjacent Watson House, the only extant residence in the area. Both are part of the Shrine of St. Elizabeth Ann Bayley Seton. The parish shared its mission of hope following the September 11 Tragedy in 2001. Without a resident population, the Shrine is open to commuters, visitors and tourists for prayer.