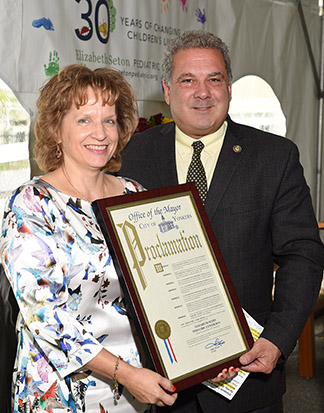 Elizabeth Seton Pediatric Center celebrated its 30th anniversary on September 23, 2018 with a day of prayer, tributes, and fun activities for families, residents, staff and supporters. Most Rev. Gerald Walsh, a Board member and faithful friend of the Center, presided at a noon liturgy.

“We’re Better Together,” a spirited music/dance collaboration that drew on the talents of children and staff, launched the afternoon’s program. Sr. Carol Barnes’ reflection named the anniversary as “a day for great celebration and expressions of immense gratitude for all that this organization has become…and confidence in all that it will become in our future.” At the “heart” of ESPC, Sr. Carol noted, are the 21 staff members with 25 or more years of service who were honored by CEO Pat Tursi during the program. She thanked them and their colleagues “for wearing yourselves out for Charity,” and welcomed “the next generation who will carry the mission flame,” continuing the rich heritage of the Sisters of Charity at the Elizabeth Seton Pediatric Center. “Mother Seton taught us to discover the courage that lies in each of us,” Sr. Carol said, “to seek the poor, the sick, the disenfranchised, and open our arms even wider…to find the resources in spite of how daunting that may be, to refute those who say it cannot be done, and to make a home for children who need our care.”

Several elected officials from the city of Yonkers and the New York State legislature presented tributes. In her closing prayer, Sr. Dorothy Metz, SC, Chairperson of the Elizabeth Seton Children’s Foundation, recalled the day’s Gospel from St. Mark (9:30–37) in which Jesus took children in his arms and blessed them. “Grace us with that same tenderness toward all your children,” she prayed.

The Center’s next bold initiative focuses on residents approaching the age of 21. At present, regulations require that such young people be discharged to an adult care facility. Instead, plans for the “Home to Stay” program will make it possible for these young adults to live on the Center’s campus with specially designed services.

On September 23, 1988, a program of the NY Foundling for children of drug-addicted mothers or born with AIDS moved into newly designed quarters in Chelsea. Later separately incorporated as the Elizabeth Seton Pediatric Center, sponsored by the Sisters of Charity of New York, it soon welcomed ventilator-dependent children and others with a wide range of medical complications. Since its 2012 move to a state-of the-art facility in Yonkers, the Center has become the largest post-acute pediatric facility in the country, with a staff of over 750 caring for 169 children.

Loving god, we ask your continued blessing on the employees we have honored today.
Extend your blessing to all who have gathered here for this 30th Anniversary celebrating the mission to enhance the lives of the children entrusted to the Elizabeth Seton Pediatric Center.
St. Mark in his gospel tells us that Jesus took the children in his arms, he laid his hands on them and blessed them. Grace us with that same tenderness toward all your children. Amen.