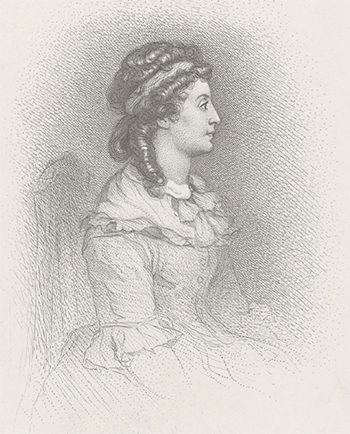 Elizabeth Seton had two life-changing experiences in a place of quarantine.

In 1799 her father, Dr. Richard Bayley, became Chief Medical Officer at the Quarantine Station on Staten Island. His task: to examine immigrants to prevent any with contagious diseases from coming ashore.

Elizabeth and her family were frequent visitors to the home he built near the Station. She was there in June 1801, when he himself contracted yellow fever, a disease from which there was no hope of recovery. He lingered in excruciating pain for a week, cared for by his favorite daughter, the only member of the family with him when he died.

In 1803 Elizabeth and her husband William, accompanied by their eight-year-old daughter Anna Maria, embarked on a journey to Leghorn, hoping that the long ocean voyage and warm Italian sun would give the ailing William some respite from his constant pain.

News about a deadly outbreak of yellow fever in New York had already reached the port city, and when the Shepherdess arrived on the morning of November 19th without proper health clearance, authorities feared the worst. With little real knowledge of what a yellow-fever victim looked like, they decided that William fit the description and ordered the family to be detained.

The quarantine station, known as the Lazaretto, was some distance away, situated on a canal. It had been rumored that it was a sort of hospice or rest home, a place of comfort for the sick. Nothing could have been further from the truth. Ordered into a little boat, the Setons were rowed “out to sea again…over the waves.” An hour later they came to a grim stone building, where a guard pointed with his bayonet toward the entrance.

The family was taken up the twenty steps to their quarters, Room Number 6, where they would be locked in during their stay. The room had a brick floor, naked walls, and on the floor a jug of water—nothing else. On that first night the captain in charge of the facility had mattresses laid on the floor, and had a meager supper brought up for them. There was a single small fireplace that would eventually provide a little heat. However, the wind that blew through the cracks of a single window spewed smoke and ash whenever it was used, causing William uncontrollable choking.

Philip Filicchi’s wife, Mary, who had been at the port to welcome the family, hurried by carriage to the Lazaretto, stood outside and called up to them, assuring them of help. The Filicchis continued to provide food and warm blankets, and eventually a bed for William. Guy Carlton Bayley had also been at the pier to welcome his half-sister but was prevented by one of the officers from approaching the family.

During their twenty-five-day incarceration, the lives of the Setons were transformed. William, not a religious person, came in touch with God as a loving Father and savior. It was because of Elizabeth’s unwavering faith in the providence of God that he came to a new place of peace and resignation.

When they were released on December 19th they had to make the fifteen-mile trip by carriage to Pisa; Elizabeth doubted whether her husband would survive that journey. He lived another nine days, and after a final night of intense suffering, died on December 27, 1802. His final words were of love for his wife and family, ending with “May Christ Jesus have mercy and receive me.”

Elizabeth had seen the suffering of the immigrant families at her father’s quarantine station. In the Lazaretto, she knew their pain in a different way. She had become one with them.

(Material taken from Elizabeth’s journal of reminiscences, printed in the Winter 2019 issue of Vision)