During this Election Year 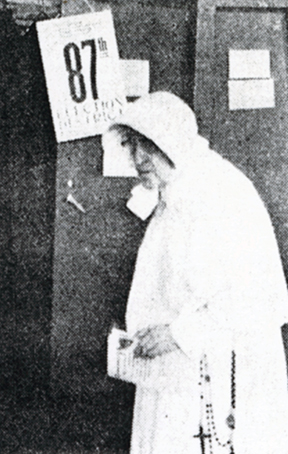 Months after quarantine in New York City — home of the Sisters of Charity of New York — and the gradual re-opening of schools and businesses, a presidential election is now less than two weeks away. This year, with voting logistics re-imagined to reflect health-related concerns, many registered voters will choose to submit a mail-in ballot to avoid district polling stations.

Accommodations for absentee voting was also recognized in the early history of the Community. From a historical perspective, the importance of elections and voting procedures to include the sisters on mission characterized the selection of leaders of Elizabeth Seton’s community, the Sisters of Charity of St. Joseph’s in Emmitsburg. Sisters missioned to locations at a distance from the Motherhouse were unable to travel for the singular task of voting in Congregation elections.

When Elizabeth Seton died before completing her term as Mother, Fr. Dubois wrote the news to the sisters on mission and shared the electoral process for replacing her. In a letter from January 6, 1821, to Sr. Rose White, a Sister Servant in New York, he noted:

“By a resolution of the Council taken two days previous to her death…it has been determined that all our Sisters abroad should write to me by the first mail after the receipt of this my letter to let me know their wish respecting the two Sisters which, by the Constitution, we are to represent to the general assembly of the Sisters for election to succeed our departed Mother…. it has not yet been determined whether our Sisters of the distant establishments should have a vote in the election and by what means that vote should be obtained…but the Council, wishing to consult the wishes of our dear Sisters abroad, have adopted this temporary measure until experience has enable us to adopt a constitutional rule…”

During this election year, as protesters appeal for civil rights, it is poignant to note that the right to vote was gained only after constitutional amendments remedied the inequities denying certain groups. Similarly, the democratic procedure developed by the early leaders has been affected by the periodic revisions of the Congregation’s Constitution during the over 200-year history of the community.

In January 1812, Sr. Rose White noted in her journal: “[The Constitutions and Rules] modified to suit this country…were read to the Sisters assembled for this purpose…We were at liberty to adopt these or not, free to retire if we wished from the Community. All were invited to remain, notwithstanding bad health and other infirmities. Each was invited to raise her hand, if she was willing to adopt the rules.”

The rule of popular vote drives elections in the Community. Based upon canonical approval received in December 1932, the First General Chapter election took place at Mount St. Vincent on July 1 and July 2, 1933 with 199 delegates present. During Assembly 2019, 81 delegates were chosen to vote in the election. Since that time and continuing every four years, officers to include President, Vice President, and Councilors are elected to manage the Congregation’s administration and membership, sponsored ministries, and all community activities.

Photo: The photograph of Sr. Anastasia Marie Doyle, carrying a completed ballot to submit at the 87th Precinct polling station, is a demonstration of the sisters’ commitment to participate in the election process. Mary Gertrude Doyle was born on June 7, 1894, in New York City. As a young girl, she resided in the parish of St. Peter, Staten Island, and attended St. Peter Academy. Sr. Anastasia Marie entered the Sisters of Charity of New York on September 8, 1912; Sr. Mary Gratia Doyle, her sister, entered six years later. Sr. Anastasia Marie attended the College of Mount Saint Vincent while teaching elementary school at St. John the Evangelist in White Plains. From 1917 until 1922, she taught at St. Edwards in Shamokin, Pa., an area where illness was particularly harsh during the 1918 epidemic. Sr. Anastasia Marie retired in 1971 and lived at the Mount Saint Vincent Convent for seven years. She passed in 1978 at St. Vincent’s Hospital, Manhattan.