“O Come, Let Us Adore Him, Christ the Lord!” 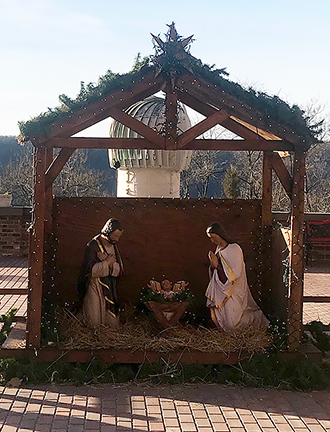 Early in December, Pope Francis traveled to Greccio, the mountain village in Italy where Saint Francis of Assisi created the first crib scene in 1223 to commemorate the birth of Jesus. There he delivered a special Apostolic Letter, “Admirabile signum” (admirable sign). It offers us a rich reflection on the mystery of Christ’s Incarnation, portrayed concretely in the nativity scene in figures and images unique to each culture.

Following are some excerpts from Pope Francis’ words. Read more at https://www.vaticannews.va/en/pope/news/2019-12/pope-francis-apostolic-letter-nativity-scene-meaning.html

[The crèche] “never ceases to arouse amazement and wonder….The depiction of Jesus’ birth is itself a simple and joyful proclamation of the mystery of the Incarnation of the Son of God.”

“The nativity scene is like a living Gospel rising up from the pages of sacred Scripture.” [When we ponder the Christmas story, it is like setting out on a spiritual journey,] “drawn by the humility of the God who became man in order to encounter every man and woman.”

[God loved us so deeply] “that He became one of us, so that we in turn might become one with Him.”

“Coming into this world, the Son of God was laid in the place where animals feed. Hay became the first bed of the One who would reveal Himself as ‘the bread come down from heaven’.” [The crèche] “evokes a number of the mysteries of Jesus’ life and brings them close to our own daily lives.”

When Saint Francis came to Greccio on December 25, 1223, he saw caves that reminded him of Bethlehem’s hills]. “When Francis arrived, he found a manger full of hay, an ox and a donkey.” [Over the manger, a priest celebrated the Eucharist,] “showing the bond between the Incarnation of the Son of God and the Eucharist.” [So began the beloved tradition of the crèche,]  “with everyone gathered in joy around the cave, with no distance between the original event and those sharing in its mystery.” [This simple yet profound sign was a great work of evangelization; its teaching continues to radiate] “ the beauty of our faith.”

Why are our hearts moved by the Christmas scene? Because it reveals the tender love of our God. Since the time of Francis,  the nativity scene has invited us to ‘feel’ and ‘touch’ the poverty that God’s Son took upon Himself in the Incarnation. It asks us to meet Him and serve Him by showing mercy to those of our brothers and sisters in greatest need.”

[When we reflect on the elements featured in the nativity scene, we notice first] “a starry sky wrapped in the darkness and silence of night.” [As we remember our own experiences of darkness and night, we remember too that God did not and does not abandon us, even then.] “His closeness brings light where there is darkness and shows the way to those dwelling in the shadow of suffering.”

[Pope Francis next points to the shepherds.] “…unlike so many other people, busy about many things, the shepherds become the first to see the most essential thing of all: the gift of salvation. It is the humble and the poor who greet the event of the Incarnation.” [They, in the shepherds, respond to God] “who comes to meet us in the Infant Jesus by setting out to meet Him with love, gratitude and awe.”

[The poor and the lowly present in our midst remind us that] “God became man for the sake of those who feel most in need of His love and who ask Him to draw near to them.” [Lying in the manger,] “Jesus proclaims, in a meek yet powerful way, the need for sharing with the poor as the path to a more human and fraternal world in which no one is excluded or marginalized.”

[Pope Francis invites us next to look deeply at the figures in nativity scenes who do not appear in the Gospel stories,] “from the shepherd to the blacksmith, from the baker to the musicians, from the women carrying jugs of water to the children at play: all this speaks of everyday holiness, the joy of doing ordinary things in an extraordinary way.”

[Next we look reverently on Mary and Joseph.] “Mary is a mother who contemplates her child and shows Him to every visitor. In her, we see the Mother of God who does not keep her Son only to herself, but invites everyone to obey His word and to put it into practice.” [By her side stands Joseph,] “protecting the Child and His Mother.”

[But when we place the statue of the Christ Child in the crèche, it truly comes to life, says Pope Francis.] “It seems impossible, yet it is true: in Jesus, God was a child, and in this way He wished to reveal the greatness of His love: by smiling and opening His arms to all.” [The crèche not only shows us the central event in human history; it also] “makes us reflect on how our life is part of God’s own life.”

[The nativity scene is key to the process of evangelizing, of passing on the faith, concludes Pope Francis.] “Beginning in childhood, and at every stage of our lives, it teaches us to contemplate Jesus, to experience God’s love for us, to feel and believe that God is with us and that we are with Him.”

Sr. Regina, a writer, retreat leader, speaker, and spiritual director, serves as Charism Resource Director for the Sisters of Charity of New York.