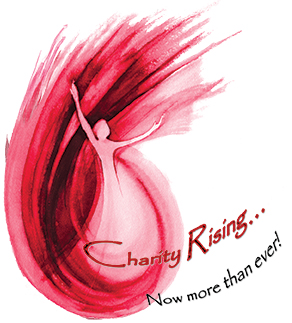 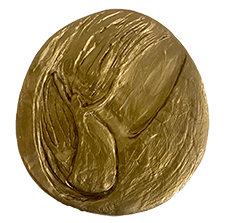 Sister Katie Aucoin made a Charity Rising medallion for every Assembly participant.

Narrated by Sister Mary Mc Cormick, the theme of the Assembly came to life in the opening prayer. Wearing a red flowing gown to represent Charity Rising, Associate Nicole Quaranto entered the meeting room holding a votive candle. Sister Elizabeth Vermaelen followed with the symbol representing St. Vincent de Paul, the Flame of Charity. Sister Florence Mallon represented St. Louise de Marillac with a rain stick to invoke wind, a symbol of the Spirit. Sister Rosenda Magdalena represented St. Elizabeth Ann Seton and the earth with soil; Sister Therese McElroy represented Mother Elizabeth Boyle, the first Mother Superior of the Sisters of Charity of New York, with water, the symbol of Baptismal renewal. At the close of the prayer, the Sisters in the ceremony distributed Charity Rising medallions made by Sister Katie Aucoin for each person present.

In addition to the New York Sisters who live in Guatemala, a total of eleven Sisters, Associates, and partners in ministry in that country also arrived for the Assembly. To facilitate full participation, Sister Veronica Mendez, RCD, and Sister Joanne Muñoz, SSND, provide Spanish/English translation, a first in the Congregation’s Assembly history.

The remainder of the Assembly promises to be engaging, and busy. Eighty-one Assembly delegates will vote on issues about the future work of the Congregation, the Constitution and Directory, and the next President, Assistant(s), and Councilors. The Spirit will surely be working overtime in Tarrytown, N.Y.!