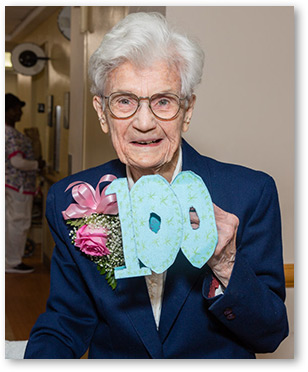 Sister Angela Marie, now in her seventy-ninth year as a Sister of Charity, served in education for forty years where she taught grades one through eight. Her mission assignments include Holy Trinity, Ascension, and St. Joseph in Manhattan; and Visitation and St. Athanasius in the Bronx. She also taught at St. Francis of Assisi, Mt. Kisco; St. Gabriel, Queens; and St. Denis, Yonkers. In 1979 she joined the staff at Sisters of Charity Center, where she served until 2010 with a level of skill and precision that is unequaled to this day.

After living at the Convent of Mary the Queen for two years, Sister Angela was one of twenty-three Sisters that moved to the Jewish Home LifeCare assisted living facility on University Avenue in the Bronx (now The New Jewish Home) in 2014. In an interview with the Associated Press, Sister Angela was quoted as saying, “I don’t think anyone came here with a heavier heart than me.” (http://media.wix.com/ugd/c24ceb_5f2c2b2f409948afad60f79197a14509.pdf) But in a short time Sister Angela Marie came to love her new home and welcomed the opportunity to continue the mission of charity in a community that includes not only lay people, but also those of different faiths.

The staff and other residents celebrated Sister Angela’s birthday on February 22 with a magnificent breakfast and a big cake. Sister Angela was so moved by the outpouring of love and kindness shown to her by the staff of The New Jewish Home that she was compelled to call Sister Eileen McGrory, Secretary of the Congregation, to express her appreciation. Click here see video.

On Sunday, February 27, Sister Angela’s family, fellow residents, Sisters of Charity, Associates and Companions joined her for Sunday Mass at Kittay House where members of the Congregation had arrived early to decorate the room and make every table a festive one.

Father John Duffell, who presided at the Mass, spoke of Sister Angela’s forty years in education and the thirty-one years she served at the Sisters of Charity Center. He also marveled at her computer skills and the program cover and menu cards she created for the party.

A luncheon followed the Mass with the Congregation serving as the wait staff. After lunch Sister Eileen McGrory, who worked with Sister Angela at Sisters of Charity Center, spoke of the meticulous manner in which she worked and her ability to break down large tasks into small manageable projects until the task was completed. Sister Angela’s cousin, Michael Hearty, spoke on behalf of the family, recalling the closeness he and his siblings enjoyed with the Rooney family and how much they treasure their relationship with her today.

After a rousing rendition of Happy Birthday, Sister Angela thanked all for making her 100th birthday so special. She was particularly grateful to her fellow Sisters saying, “All hail and praise to you, my congregation, whom I love, for all you have done for me.” Sister Jane Iannucelli, SC, President of the Sisters of Charity, responded for the Congregation proclaiming, “Angela, all praise and hail to you from your Congregation, who loves you so much and is grateful for all you have been and done.”

The day of celebration ended with fellow resident Sister Maria Louise, ICM, singing The Rose to Sister Angela, a fitting tribute for a woman of love, faith, and beauty. God bless Sister Angela Marie Rooney, SC, now in her second century of a life lived in love.