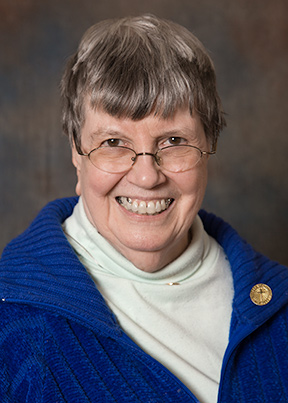 Sister Teresa Dermody, SC, celebrates over sixty years as a Sister of Charity and cherishes her life as a gift with gratitude to God and the Community. Her early education at Cathedral High School by the Sisters of Charity led her to consider and follow a vocation in the footsteps of St. Elizabeth Ann Seton.

Sister Teresa taught in elementary school at St. Denis in Yonkers, St. Emeric in Manhattan, and Visitation in the Bronx. Meanwhile, her mathematical ability led her to study for an MA in Mathematics at Manhattan College. From there, she was missioned to teach Math at York High School in Pennsylvania, which was a challenge in many ways as it opened her to students of a different culture and broadened her world view.

Sister Teresa continued teaching math at St. Barnabas High School in the Bronx. She reflected that each teaching assignment offered her new learning experiences and surprises. Sister said, “There is nothing so rewarding to a teacher as to hear a student say, ‘I got it!’”

After fifty-three years in education, Sister Teresa worked in the Advancement Office at Mount Saint Vincent, a position she thoroughly enjoyed. Sister Teresa moved to The New Jewish Home in the Bronx in 2014.

In her retirement, Sister Teresa has the time to reflect on her life and seeing the best in everyone she meets.