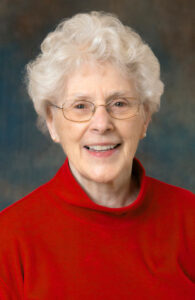 Sister Eileen McGrory has a sign outside her office in the Sisters of Charity Center revealing her precision as a grammarian: “Let’s eat Grandma. Let’s eat, Grandma. Commas Save Lives.” Throughout her teaching career and related ministries, her exacting and generous approach is always good-humored!

Sister Eileen began her extensive career in education by teaching elementary grades at Ascension in Manhattan and Immaculate Heart of Mary in Scarsdale, and high school level biology and religion at St. Raymond Academy in the Bronx. She also taught biology to freshmen at the College of Mount Saint Vincent, as well as to adults in the College’s Malcom King Extension Program in Manhattan.

She was the Principal at Nativity of Our Blessed Lady in the Bronx, and then returned to the classroom at Elizabeth Seton Academy in Yonkers.

With a master’s degree in theology and a year of study at the Institute for Spiritual Leadership in Chicago, the Congregation appointed her to a five-year term as Formation Director. Her enthusiasm for teaching took her to the Diocese of Shreveport in Louisiana for sixteen years. A mission diocese with limited resources appealed to her as “fertile soil for Elizabeth Seton’s vision and zeal.” Employing her educational background and training in spiritual direction, she offered courses in theology, the Documents of Vatican II and themes in spirituality, along with retreats and workshops. Additionally, for eight years she filled roles as diocesan Director of Youth, Young Adult, and Campus Ministry and as Director of the Library.

Through the Greco Institute, Sister Eileen became a facilitator in the Ministry Extension Program of Loyola University in New Orleans, a three-year program towards a master’s degree in pastoral education. During these sixteen years, Sister Eileen spoke in nearly every church parish in the diocese across north Louisiana, from the Texas to the Mississippi borders, many in rural locations. She fondly recalls her experience, “… it is a wonderful, warm experience to be welcomed in any and all parishes in which I have taught in the diocese.”

Her journey would bring Sister Eileen back to the Sisters of Charity Center at Mount Saint Vincent in the Bronx. As Secretary of the Congregation from 2004 to 2011 and again from 2015 to 2019, Sister Eileen was involved in every aspect of Congregation life, saying, “I feel energized when I have brought a task to completion that is good for others or accomplishes a step for the mission.”

As Assistant to the President from 2011 to 2015, Sister Eileen felt called upon to work with the Executive Council towards effective dialogue. She commented upon pressing issues for Leadership, “To follow the call of the Spirit spoken in the 2011 Direction Statement, that this is ‘our time,’…that our God is certainly with us, designing movement/processes/dialogues that will open to articulating the vision for our future.”

Sister Eileen currently works as Coordinator of Special Projects, a position that builds on her knowledge of the executive and administrative affairs of the Congregation. Among other tasks, she is completing a multi-year project to verify the burial locations of all members of the Community. 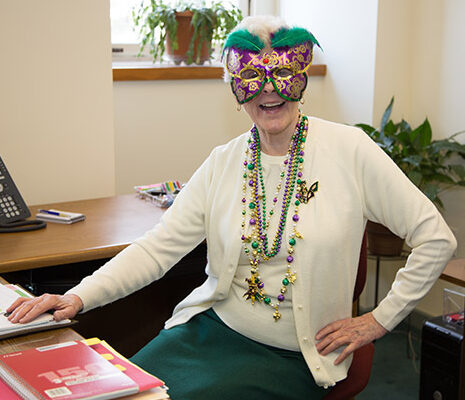 Sister Eileen continues to share her knowledge and devotion as an esteemed teacher and theologian, records manager, grammarian, as she is an extraordinary Sister of Charity of New York. Though back in the Bronx, Sister Eileen still carries with her the spirit of the years in Louisiana. Every year on Shrove Tuesday, she delights the Sister of Charity Center staff by donning her carnival colors, mask and beads, making for a joyful Mardi Gras Day.