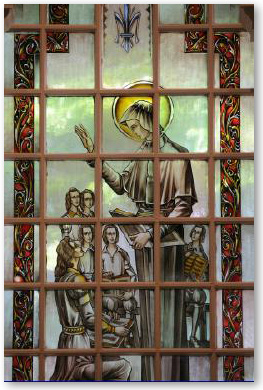 Saint Elizabeth Ann Seton would be surprised to find herself called, not quite accurately, “Foundress of the Parochial School System.” “All I did,” she might say, “was to welcome three of our poor Savior’s country children” to the free day school she and the first Sisters of Charity opened in Emmitsburg, Maryland, February 22, 1810. She had no idea that from this tiny seed, a veritable forest of Catholic schools would cover the nation.

Elizabeth, a born teacher, enthusiastically supported the bishops who saw education, especially of girls, as crucial for the future of the young U.S. church. Wave after wave of immigrants soon underscored that need. The first missions of Elizabeth’s Sisters of Charity, orphanages in Philadelphia (1814) and New York (1817), both began educational programs to serve poor day students. When the bishops at the First Plenary Council of Baltimore (1852) decreed that every parish should begin and support a free school, they built on an existing network largely shaped by the pioneering efforts of Sisters of Charity and other women religious.

Financial realism often led the Sisters to start “pay schools” or academies, on whose income they depended to underwrite the cost of free schools for the poor, their first priority.

To anxious parents, Elizabeth wrote regular reports on their child’s progress (or lack thereof). Mr. & Mrs. Robert Fox of New York were no doubt relieved to hear her expert assessment of their three daughters at the Academy in 1816; “excellent natural dispositions….very attentive to their improvement in every thing proposed to them.” Elizabeth found adolescent girls “more difficult to manage”; many high school teachers will readily agree.

Elizabeth’s educational philosophy was simple. Always a mother, she believed that order and discipline were of little effect in the classroom without kindness: “If the heart is lost, all is lost.” Educators of every generation know the truth of her words: “Tenderness… is the language children best understand.”

From 1810 until today, generations of Sisters of Charity educators and their dedicated lay colleagues have sown “the seeds of useful knowledge” (Rule of 1812) in the young and not-so-young. They led and innovated as education evolved from one-room schoolhouses to ungraded classrooms to long-distance and lifelong learning. In honor of all educators, take a minute to remember, give thanks for, and tell us about, that unforgettable teacher who made a difference in your life.