“…Your mercy, your dear mercy is all my confidence…” – St. Elizabeth Ann Seton

What He Didn’t Say 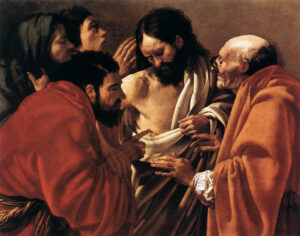 In a recent email, a friend wondered about the silences of Easter morning: Were the grieving women silent as they hurried to the tomb? What was the silence like, ten minutes before God raised Jesus to new life? The email suggested that we probably learn as much about the mystery whom we name “God” from God’s silence than we do from the voices and words that we humans claim to hear.

That reflection led me to the scene on Easter night, “on the evening of that first day of the week, when the doors were locked, where the disciples were,” as today’s Gospel reading (John 20:19-31) begins. Were Jesus’ followers frozen in fear, still grappling with what had taken place over the past few days? By then they would all have heard the reports either from Peter and John, who had found the tomb empty, or from “Mary Magdalen and the other Mary” (Matt. 28:8) who had actually met Jesus, alive.

Perhaps they were all talking at once, trying to make sense of it. But John tells us that they were locked away in their fear. So I imagine that it was rather quiet – dead silent, in fact – in that upper room. I wonder what they thought and felt. Was it true? Was Jesus really alive?

I wonder if it was Peter who finally put words on the fear that gnawed at them. If Jesus were really alive, what was he going to say to them?  Would he burst in, pointing his finger first at one, then at another? Would he shake his fist at them, his eyes burning with accusation and disgust at their betrayal? Would he scream and stomp and crush them with his rage?

Today’s Gospel tells a different story. The disciples didn’t even hear the door open. All of a sudden they felt a familiar presence, heard a soft voice saying: “Peace be with you.” Not “You sold me out,” not “You fell asleep when I needed you most,” not “Get out of my sight – we’re through!” Simply, “Peace be with you.”  Simply, receive this gift that I long to give you.

Though John doesn’t say it, can’t we imagine the breath they exhaled, the tears they let flow? In the hours that followed, someone surely remembered Jesus’ words from the night of the Passover supper, when he knelt to wash their feet: “I have given you an example; what I have done, you also must do.” Go and forgive; go and bring peace; go and spread mercy.

May we live in the memory of what He didn’t say – and what He did – and tell the story of the Easter mystery as a story of mercy beyond human imagining. And go and do likewise.

Sr. Regina, a writer, retreat leader, speaker and spiritual director, serves as Charism Resource Director for the Sisters of Charity of New York.