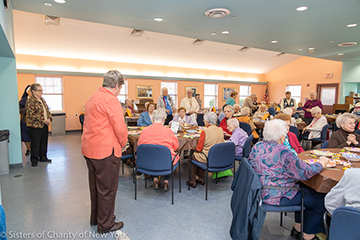 Under the supervision of Sister Eileen Patricia Walsh, resident Sisters in Nanuet prepared beautiful table settings in the development’s community room. Sisters arrived by van from Mount Saint Vincent and The New Jewish Home. Sister Donna welcomed one and all and led a prayer of thanksgiving and grace.

Some sisters served the delicious lunch while others helped themselves as conversation and laughter spread through the room. The crisp November air and brilliant sunshine added to the warmth and comfort at Seton Village. 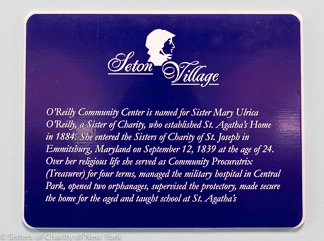 A plaque on the community room wall near the entrance is dedicated to Sister Mary Ulrica Reilly. In 1869, Mother Superior Mary Jerome Ely selected Sister Mary Irene Fitzgibbon to open the New York Foundling. Fifteen years later, she asked Sister Mary Ulrica to take on similar responsibilities at Saint Agatha Home in Nanuet. When the home opened on April 1, 1884, three sisters—ages four, eleven, and twelve—became its first residents. Five Sisters of Charity eventually formed the community at Saint Agatha’s and staffed the home. Within eight months, more than 185 children were cared for at the Rockland County home. And the rest of the story, as we know it, is part of our extraordinary history in Nanuet.

Many thanks to all in Nanuet who made the day so enjoyable. Special gratitude to Sister Eileen Patricia Walsh, who assumed responsibility for a lovely, pre-Thanksgiving luncheon.

Wording on the plaque:

O’Reilly Community Center is named for Sister Mary Ulrica O’Reilly, a Sister of Charity, who established St. Agatha’s Home in 1884. She entered the Sisters of Charity of St. Joseph in Emmitsburg, Maryland on September 12, 1839 at the age of 24. Over her religious life she served as Community Procuratrix (Treasurer) for four terms, managed the military hospital in Central Park, opened two orphanages, supervised the protectory, made secure the home for the aged and taught at St. Agatha’s.