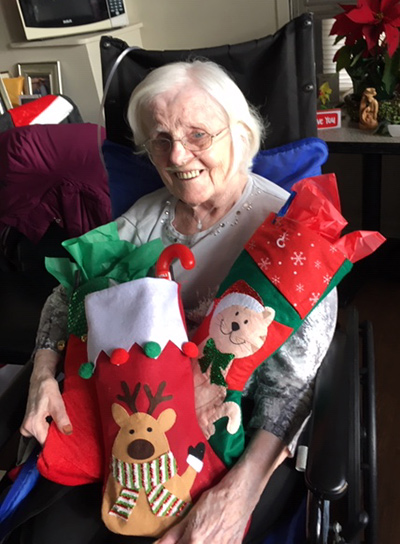 Sr. Mary Caulfield and her special gifts for the Sisters at Kittay House.

Sister Mary Caulfield, a Sister of Charity since 1949, lives at Kittay House in the Bronx. With the help of Sister Arleen Ketchum, Sister Mary created a little Christmas joy for the twenty-two Sisters in the Kittay community by purchasing stockings for them. Together they filled the stockings with cookies, candy, popcorn, ornaments, and pens. There is a special meaning behind the gift of Christmas stockings for Sister Mary, which she shared with her Sisters, and now with all.

When little Mary Caulfield was just 2, her dad died, and her mom had to find work to support herself and her two young daughters. Because she had no one to care for Mary and her 4-year-old sister, she brought them to live with her mother in Ireland, who had very little of her own. Mary and her sister remained in Ireland with their grandmother until she was about ten.

Despite the great distance between them, Christmas was a special time for Mary and her sister. Both girls received a stocking filled with goodies from their mother in America, a gift that brought them so much joy.

This year, Sister Mary was delighted to relive that memory with her community of Sisters, sharing the joy and cheer of that little girl long ago.

Christmas Blessings to all.