A Family of Faith—The Sisters of Charity & the Donachie Family 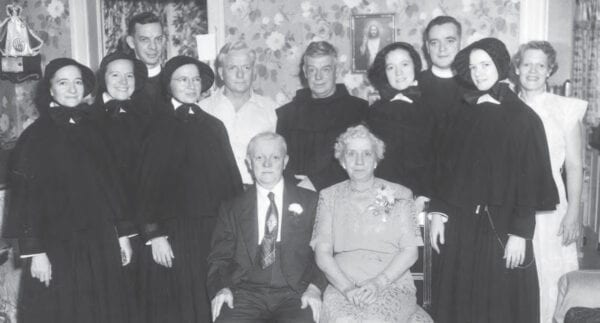 One summer morning in July 1953, the day following the fiftieth wedding anniversary of Jean and Thomas Donachie, passengers crowding onto the local bus, were delighted to discover that the Daily News featured the beloved Donachie clan.

St. Barnabas parishioners were excited and proud. Little did they suspect that Sisters of Charity were strongly discouraged from making headlines in the Daily News and that Sr. Dolorita Maria, the oldest of the clan, would have a lot of explaining to do at Mount Saint Vincent.

On September 7, 1930, soon after graduating from St. Barnabas High School, Sr. Dolorita Maria entered the Congregation. Over the next 70 years, she ministered as a dedicated educator, group mother, regional superior and librarian. No matter where she served, her gentle presence created a spirit of calm and love.

Sr. Dolorita’s presence was never more evident than in the small, busy library at St. Raymond Academy. There, everyone found a welcoming smile. Students who felt ill, particularly on quiz day, liked to recuperate in the library where, much to the chagrin of their teachers, Sr. Dolorita served the ailing students “a nice cup of hot tea.” Even delinquents found solace in the library, for as they awaited their fate, Sr. Dolorita offered them words of consolation and comfort despite the stern glare of the principal.

In later years, Sr. Dolorita volunteered her services with the Little Sisters of the Assumption in Harlem. She prepared adults for the General Equivalency Diploma, helped them develop skills that eventually led to their employment and visited families who suffered many hardships, listening to their stories and bringing them hope. Upon her death on May 8, 2004, the sisters offered thanks for her prayerfulness and wisdom that enriched the Congregation.

Compassion, humility, wit and love for the poor—qualities inherited from their parents—characterized the five Donachies. Yet, each of the sisters brought her unique spirit to the Sisters of Charity so clearly expressed in the ministry of Sr. Jean Miriam who, on September 7, 1931, at age 16, followed Sr. Dolorita into the Congregation.

In her 59 years of ministry, Sr. Jean, born on December 8, 1914, “smack in the middle of the Donachie clan,” served in parishes throughout the Archdiocese of New York, Brooklyn, Queens and in the Bahamas. At one time, she and Sr. Genevieve Brown dreamed of Africa, but the Holy Spirit led them, instead, to Andros. The Androsians were poor, and Sr. Jean was so comfortable living amid their simple lifestyle. She felt at home in their one-room dwellings, where they told her stories of long ago, shared their ice cream and taught her about yams, wild ones and “tame ones.” She knew what families needed—clothes and food—but she also loved to delight the children with her jar of candy.

Every hardship, Sr. Jean believed, offered an opportunity for ministry, and every inconvenience could be turned into an amusing anecdote. In their “fairly well-furnished home,” they found three bureau drawers with no bureau, a bureau with one drawer missing and one bed that fell apart. Every evening she courageously fought off the mosquitoes and sand flies that visited at sunset. Still, in the light of the graciousness and hospitality of the Androsians, these “pests” could not dampen her spirit.

Above all, Sr. Jean was a poet. In the wonder of creation, in a simple flower or the song of a sparrow, she experienced the mystery of love, and she found words to express her joy in these gifts of God. On November 8, 1990, Sr. Jean woke to the incredible beauty of eternity.

Sr. Miriam Vincetta was the third Donachie to grace the Congregation. Born on October 15, 1916, into a fun-loving family, she soon emerged as the leader of mischief. That might have been the reason she was the favorite babysitter for her younger brothers and sisters, and even the neighborhood children.

Before entering the Congregation on September 7, 1940, she taught at St. Augustine’s School in the Bronx. At the end of her first year, a happy, breath-taking one with 60 second-grade boys, Sr. Marie Vincetta Leahy, the principal, declared that Miss Donachie was a born teacher. That experience prepared her for the years ahead.

After her first vows, Sr. Vincetta was missioned to St. Patrick School, Prince Street, where she met Sr. Maria Monica McInerney, who, much like Sr. Marie Vincetta, was another model of charity who influenced her life. In 1950, caught by the missionary spirit, she sailed for Nassau, and like Sr. Jean, she found joy ministering among the Bahamians. Six years later, she was back at St. Augustine, then St. Paul’s in Brooklyn, and later St. Athanasius.

It soon became evident that Sr. Vincetta was ill. She underwent cobalt treatment, but even that could not crush her buoyant spirit. Despite her serious diagnosis, on New Year’s Eve, 1963, while staying with Sr. Dolorita, she prepared the traditional simplicity, a simple play which became the highlight of the evening. It was probably her last opportunity to create fun and make others happy.

On April 23, 1964, her suffering over at last, she died surrounded by her sisters and brothers. The Congregation grieved with her family, and very specially with her parents. Her three priest brothers offered her Mass at St. Mary’s Church in Yonkers, and Sr. Vincetta, having faithfully fulfilled her mission, was laid to rest in St. Raymond Cemetery.

The Donachies welcomed a new daughter, Jean, into their family on November 8, 1923. Like her siblings, she enjoyed happy childhood memories and caught the family spirit of simplicity, love for the poor and sense of humor.

Jean, Sr. Marie Thomas, entered the Congregation on February 2, 1944, and just a few months later, she arrived at Incarnation School. From her earliest days, she was a dedicated teacher who, as noted in her eulogy, had the exceptional gift of showing sensitivity to the shy students who could easily have been overlooked in her crowded classroom.

Later, as principal and superior at Visitation, she welcomed visitors to her office, earning a reputation as a good listener and wise counselor. Similarly, the junior professed Sisters who had monthly meetings at Visitation found Sr. Thomas to be open and supportive as they considered the impact of Vatican II on religious life.

That same spirit followed her to SS. Peter and Paul School in the Bronx, where she ministered for 33 years. Not only was she remembered as an outstanding educator, but as an advocate for the poor and elderly. She visited the Irish senior citizens, the remnant in the parish, and opened her heart to the homeless who came to the convent door.

Even the animals sensed her kindness. She was a friend to the dogs and cats, and the children believed she had a healing touch that could cure their beloved pets. Among her great joys was music, and she willingly shared her talent at any gathering. Her eulogy records that her first novitiate rendition was “Pistol Packing Mama” played to a slow beat, but she soon amended her repertoire, and, in time, she led the hymns at morning Mass.

Sr. Thomas, the last surviving member of the Donachie family, must have missed her brothers and sisters. However, her strong faith sustained her until August 22, 2008, when God called her home to join the Donachie clan.

The youngest member of the Donachies, Sr. Mary Bernard, was born on February 9, 1925. She thrived in her loving family, and, following in the footsteps of her sisters, she graduated from St. Barnabas High School. The next few years found her on Madison Avenue, a stenographer in Metropolitan Life Insurance Company, but on February 2, 1950, she answered the call that tugged at her heart.

As a Sister of Charity, she taught in two elementary schools, and in September 1960, she arrived at Grace Institute. There she was the favorite teacher and ideal Sister of Charity for the young women in her classes. She was a “sweetheart,” a student proclaimed, so sensitive, so kind to everyone. You might say she was a true Donachie.

She was missioned to Mount Saint Vincent in 1965. Shortly into that assignment, however, she was diagnosed with a terminal illness. Only two years after the death of Sr. Vincetta, the Donachies and the entire Congregation was shocked by the devastating news. Prayers were offered for her recovery, but after weeks in St. Vincent’s Hospital, it became clear that God had other plans. Soon after the new year, on January 21, 1967, she died, just short of her 42nd birthday. She was buried in St. Raymond Cemetery next to Sr. Vincetta. Many years have passed but memories of Sr. Bernard still linger.

The Donachie family is remembered with great affection by all who knew them. Although each Sister of Charity has her own favorite story, they all agree the Donachies lived humility, simplicity and charity. They blessed the Congregation, and their memory is forever cherished. 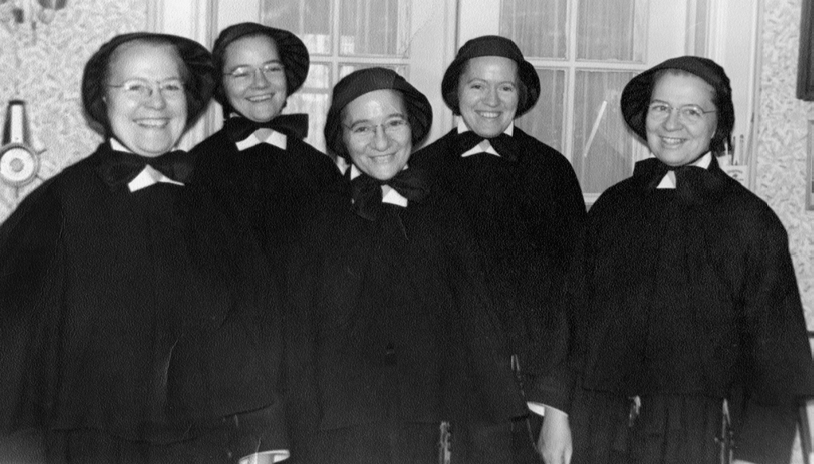