A Conversation with Sister Dorothy Emanuel 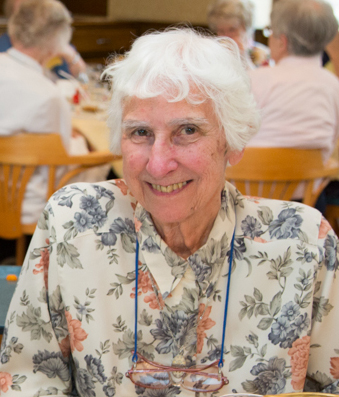 Sister Dorothy welcomed me warmly to sit with her in her room at Kittay Senior Apartments, acutely aware that we were going to share in a bit of her experience of being a Sister of Charity. When at one point in the sharing Sister Dorothy said somewhat wistfully, “… it doesn’t matter anyway”… “not my name…,” I assured her that knowing that this is her story is essential to those of us fortunate enough to share it.

In response to how she had heard God’s call to become a Sister of Charity, Sister Dorothy happily claimed to be a “Barnabite” from Kindergarten through High School, a happy experience for her growing up in the Woodlawn section of the Bronx. Sister Dorothy  enjoyed working for a year after high school. She spoke of her loving relationship with her parents Regina and Frank, describing her special closeness with her father who was not particularly happy about her entering, but gradually came around as she lived through Novitiate and her satisfying life on Mission. Sister Dorothy ’s daily prayers include those on the memorial cards of both her parents. She spoke sadly of a baby brother who died in infancy and of being close with her sister, Frances, who also had entered and then left the Sisters of Charity.

Joy and laughter enlivened Sister Dorothy’s recounting her Ventnor Mission experience giving testimony that her twelve years on mission there are among the happiest, if not the most joyful, of her life. God surprised her when Mary Bruno asked her to go to Ventnor, and she gave up teaching to do that. She glowingly described her sunrise walks on the boardwalk every morning, and pointed out the two beautiful sunrise photos which brighten her days even now as she enjoys looking at them. She so enjoyed welcoming visitors, preparing meals, doing all the needed daily tasks and (described with a wink), “ going for a swim in the afternoon.”

Before Ventnor, Sister Dorothy  found both studying and teaching math joyous and satisfying experiences. She humorously described that fun and humor were always somehow part of the ever challenging, constant changes in Math theory and pedagogy, e.g., the years of the “New Math.” Sister Dorothy  reminisced about her studies in California and other interesting places to refresh her math teaching skills. She said she and her colleagues always found fun in adapting.

Sister Dorothy  described her life at Mary the Queen as a happy time, made so by companionship, enjoyable activities, and wonderfully unique meals. “There even was a happy hour every Friday!”

To the query of whether living Mission had ever brought a surprise that was not happy, her heart-rending response came quickly with a dramatic change in facial expression, affect, and tone of voice. Sister Dorothy  added, “Until now, I didn’t think we were going to do it! But we didn’t wait! We just did it!” These last comments contained a depth of lifelong commitment to Mission, and experience of “just doing it.…” She  added almost as a reflection of each day’s lived mission, “We take it as it comes.…”

My experience in conversation with Sister Dorothy Emanuel is that she continues to live her lifelong Mission call to teach and to offer hospitality in the way she lives her life at this difficult time, with its challenges and limitations. Sharing this experience with her  elicited both a delightfully quizzical smile and a very real nod of acknowledgment.