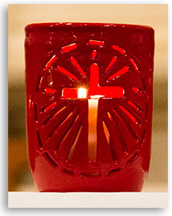 In a spirit of joyful celebration, gratitude, and tradition, Sisters of Charity, Associates, Companions of Charity, partners in ministry, friends, and family came together on June 30, 2015 in the Chapel of the Immaculate Conception at Mount Saint Vincent to pay tribute to the Sisters who served from 2011 to 2015 and bless the new Leadership Team that will serve for the next four years. 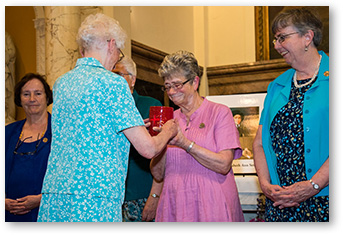 Reflecting on the reading from the first book of Thessalonians, Sister Carol Barnes—who served as president from 1987 to 1995— said, “Paul urges the Thessalonians to build each other up, to seek what is good for all people, and not to stifle the spirit nor despise the prophetic gift. Isn’t that what our call to mission is all about?”

The Ritual of Transfer commenced with Sisters Regina Bechtle and Mary McCormick reciting the names of Elizabeth Seton and the twenty-four Sisters who served as Congregation leaders. They then called forward the 2011–2015 Leadership Team: Sisters Jane Iannucelli (President), Eileen McGrory (Assistant to the President), Kathleen Byrnes, Mary Ann Daly, and Dominica Rocchio (Regional Coordinators). The Team was warmly acknowledged with a standing ovation for the care, dedication, and love with which they served during the past four years.

The new members of the Leadership Team, Sister Margaret O’Brien, who will serve as Assistant to the President; and Sisters Sheila Brosnan, and Mary Ellen McGovern, Regional Coordinators, then joined them on the altar. Outgoing members, Sisters Eileen and Dominica, presented each Sister of the new Team with a candle, a symbol of the “Hearts on Fire” theme of Assembly 2015. 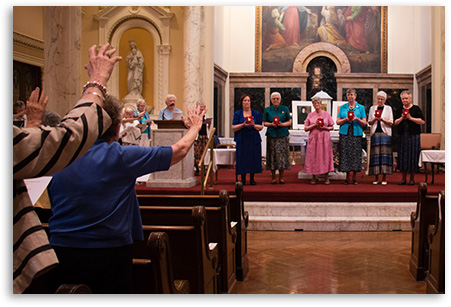 After the “Dialogue with the Congregation” in which the Team pledged their service, Sister Jane read a statement expressing her willingness to accept the call to serve as President. The Congregation raised their hands to bless and pray for the 2015–2019 Leadership Team, then joined in singing the Magnificat.

In her closing remarks Sister Jane expressed her gratitude to Sisters Eileen and Dominica for sharing their gifts of leadership for the years they served and asked for continued prayers and blessings for the entire Leadership Team.

Carrying their candles, the newly installed Leadership Team processed out behind Sister Katie Aucoin, who raised the incense burner high in praise and thanksgiving for the beautiful day and ceremony.

(In a true measure of responding to the signs on the times, the entire ceremony was made available for viewing via a live webcast. Sisters of Charity on mission in Guatemala, Sisters in the retirement homes, and all who were interested were able to catch the entire event as it happened by visiting the Congregation’s website.)

The day ended on a happy note when Sister Margaret Beaudette, a Sister of Charity whose religious artwork is world renowned, presented the Leadership Team with a relief sculpture to commemorate the occasion. The sculpture depicts Mary Magdalene at the tomb urging the apostles to believe that Jesus had indeed risen. The sculpture will soon be displayed in its new home at Le Gras Hall.