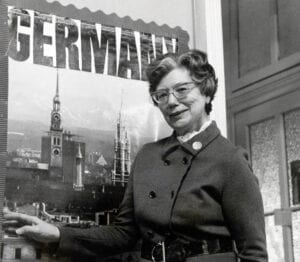 Sr. Paula stands in front of a “Germany” poster in a classroom at the College of Mount Saint Vincent, circa 1975–80, when she was Associate Professor of German and English.

Sister Marie Paula Holdman has spent her first century being a lifelong educator and student. She shares her passions for languages, the arts, travel, and education with everyone she meets. “I cannot state that ‘fondest’ applies to any one of the ministries because there were great rewards both spiritually and humanly in all of them,” Sr. Paula reminisces.

Mary Elizabeth Holdman was born in New York City on November 6, 1920, the first of three daughters. She moved with her family to Scarsdale at a young age, where she first met the Sisters of Charity at Immaculate Heart of Mary School. Calling her education “varied,” Sr. Paula explains that she had a mix of public and Catholic education, including Eastchester High School, the College of New Rochelle (CNR) and CUNY’s Graduate Center. She says her calling began when her mother, Margaret, introduced her to St. Thérèse of Lisieux at the age of 10.

“There is no doubt about it,” Sr. Paula says. “St. Thérèse turned my attention toward teaching as a religious. Sr. Mary Jerome Cusack (a teacher at Immaculate Heart of Mary who remained a mentor) made it practical. She showed the practicalities of what you would do in such a way of life.”

Sr. Paula entered the Sisters of Charity in 1942, following her college graduation from CNR. “There were only 13 who entered that year, a very small group. All of us had been very much influenced by the canonization of a young St. Thérèse of Lisieux at least some part of our vocation.”

Sr. Paula also credits her family, especially her father, Ernest—a native of Germany — with giving her a love of travel. They sailed to Europe several times when she was a young girl and traveled around the United States. Sr. Paula continued to visit Europe for a number of summers at Middlebury College and the University of Kiel and the University of Freiburg to study German. She shared those experiences with students at the College of Mount Saint Vincent as both professor and chair of the department for decades.

While at the Mount, where she began in 1953, Sr. Paula also worked with students on the newspaper. In fact, she worked with student newspapers at all her ministries. “We have wonderful people who graduated from the Mount and have followed their own careers as journalists—really great writers among the people whom I taught in the college and afterward.” 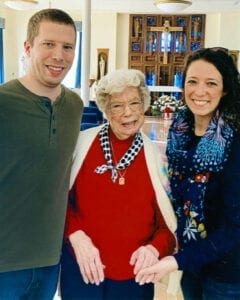 Sr. Paula put those communication skills to use in her own ministries, including director of communications, college historian, and a speaker who spread the news about the Sisters of Charity at conferences around the country. While at the college, Sr. Paula began by writing about the life of Sr. Josephine Rosaire Rae, who served as director of novices and dean of the college. “She really was a magnificent educator,” Sr. Paula says.

Sr. Josephine led the college but was not president, Sr. Paula explains, because no nun had the title at that time. “The nuns were deans, and the presidents were all archbishops — perfect example of the women doing the work,” she says with her knowing chuckle.

Looking back on her own education, Sr. Paula calls her college years at the College of New Rochelle “an adventure.” She says, “We started the year at the Great World’s Fair on Long Island. Everything about the four years was fascinating—meeting wonderful people, having marvelous professors. The whole experience of New Rochelle was the certainty that when you stepped out of New Rochelle you are going to conquer the world.”

Sr. Paula took on all her projects with the same energy and enthusiasm. During her teaching years, she also taught German to adults. She says some wanted to tell their family histories and some needed to learn German for their careers, such as the Metropolitan Opera and the FBI.

She has kept in touch with many of her students over the years which makes for having friends around the world. Sr. Paula speaks of all those relationships as enriching her life and points to the sisters in her community as a lifelong blessing.

“I had such an opportunity to share so much with them…. They all in their own way, encouraged students and that encouraged their fellow faculty members. They shared what they found interesting and amusing. They enriched your life.”