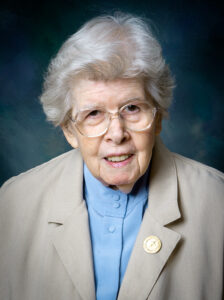 Sister Kathleen Gilmartin (Sister Thomas Marita) was born January 7, 1924, in Staten Island, New York. She was one of seven children, five daughters and two sons, born to Thomas and Catherine Nealon Gilmartin. Kathleen attended Saint Mary Elementary and Saint Peter High School, both in Staten Island. She worked for 14 years before entering the Sisters of Charity of New York on September 8, 1955.

Sister Thomas received a BA in History from the College of Mount Saint Vincent and an MA in Elementary Education from Seton Hall University in New Jersey. She received New York State Certification in Social Studies, Grades 7–9.

Sister Kathleen’s 39 years of ministry in education were spent in the higher elementary grades and, later, with young adults. In the first 14 years she taught at Saint Paul in Brooklyn, Visitation in the Bronx, Immaculate Conception in Stony Point, Saint Joseph Academy and Our Lady of Mount Carmel, both in Manhattan, and served as School Secretary at Saint Ignatius Loyola in Manhattan. For the next 21 years, Sister Kathleen taught courses in Business at Grace Institute in Manhattan. When she retired in 1998, she volunteered at Grace Institute for five additional years and later at Saint Vincent Catholic Medical Centers and Mary Manning Walsh Home, both in Manhattan.

When no longer able to volunteer, Sister Kathleen joined the retirement community at Saint Patrick Villa in Nanuet for four years, and then lived with the retired sisters at Convent of Mary the Queen in Yonkers. When it closed in 2015, she moved with other Sisters of Charity to Schervier Nursing Care Center in the Bronx. In 2020, the sisters at Schervier moved to Cabrini of Westchester in Dobbs Ferry. It is there she died on August 30, 2021, in the 66th year of commitment as a Sister of Charity.

In retirement, Sister Kathleen kept a lively interest in Congregation events, participating in the streaming of Masses and reading the weekly news bulletin. She enjoyed the outside garden at Schervier on a nice day, giving her the opportunity to greet others and to observe all that was happening. She was known to tell nurses and aides to check up on another resident who was “not looking well,” and she was often right! Visits with her sister, Theresa, were treasured, as were those with Sisters of Charity who came by.

Sister Kathleen enjoyed teaching and watching her students grow. Her keen sense of humor was appreciated by friends and all she met. We rejoice with her now as she enters the promised kingdom of God and is reunited with family and friends who have gone before her. Rest in peace, Sister Kathleen.