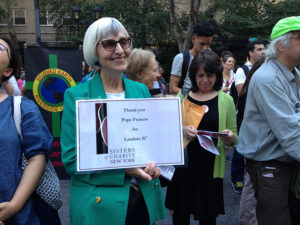 Sister Carol De Angelo was invited to give a 10-minute presentation on a webinar, “Engaging the Vision of Laudato Si’,” this Thursday, April 15, 2021. Before an international audience of religious leaders, she will share ways that the Sisters of Charity of New York network with many groups to promote care for creation in the spirit of Pope Francis’ encyclical Laudato Si’.

In a Power Point she will highlight our Congregation’s efforts to embody “Charity Rising” by living Laudato Si’s message of collaboration, community, care for Earth and all who live on it, and focus on the common good.

Sponsored by the “Sowing Hope for the Planet” campaign of UISG (International Union of Superiors General), based in Rome, the webinar is one of several directed to leaders of religious congregations across the globe. The purpose is to promote the Laudato Si’ (LS) Action Platform and Strategic Plan to be announced May 24 at the end of LS Week. The platform and plan will be officially launched by the Vatican on Oct. 4 at the end of the “Season of Creation.”

The SCNY Peace, Justice, and Integrity of Creation (PJIC) Office partners with local groups such as the Metro NY chapter of the Global Catholic Climate Movement, as well as Religious Organizations Along the River (ROAR) that advocates for issues related to the Hudson River.