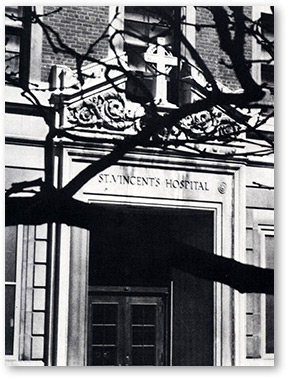 Down in Greenwich Village at the intersection of Greenwich Avenue, West 12th Street, and Seventh Avenue, directly across from what had been the entrance to the emergency room of the hospital, is a new triangular park. The property, once owned by Saint Vincent’s Hospital, has been designated as a memorial to both the hospital and the victims of the AIDS Crisis of the 1980’s. The section memorializing the hospital is complete. The AIDS Memorial, located at the apex of the triangle will be finished in May, 2016.

When visiting the park, look for six dark gray medallions embedded in the lighter gray cement of the walkway. The medallions are located near the entrances to the park. Each medallion commemorates one of the six historical events in which Saint Vincent’s Hospital played a unique role.

One medallion pays tribute to the Sisters of Charity of New York who founded the hospital in 1849. The remaining five plaques are dedicated to major events in the history of New York City and Saint Vincent’s Hospital’s role in each event.