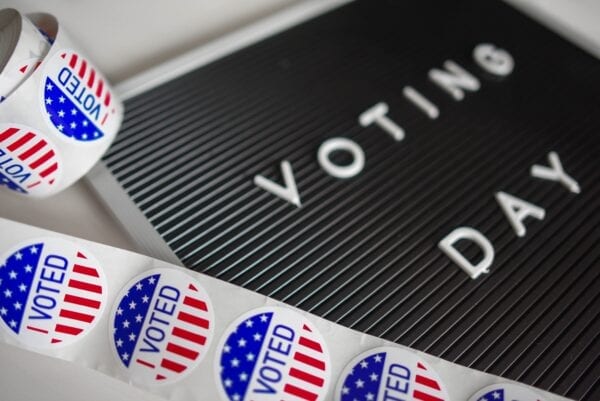 As our attention turns to the upcoming presidential election on November 3, 2020, the Sisters of Charity of Saint Elizabeth, in Convent Station, N.J., asked their Office of Peace, Justice, and Ecological Integrity to prepare reflections that will help to discern and form our consciences during this electoral season. Each week they will share a quote from the United States Conference of Catholic Bishops Forming Consciences for Faithful Citizenship: A Call to Political Responsibility from the Catholic Bishops of the United States, some questions for reflection, and a link to further material to those who would like to take a “deeper dive” into the issues the bishops raise. The Sisters of Charity of New York are grateful to be able to share the reflections created by Father Terrence Moran.

From Forming Consciences for Faithful Citizenship:
Everyone living in this country is called to participate in public life and contribute to the common good. In Rejoice and Be Glad, Pope Francis writes: Your identification with Christ and his will involves a commitment to build with him that kingdom of love, justice, and universal peace. . . . You cannot grow in holiness without committing yourself, body, and soul, to giving your best to this endeavor. The call to holiness, he writes, requires a “firm and passionate” defense of “the innocent unborn.” “Equally sacred,” he further states, are “the lives of the poor, those already born, the destitute, the abandoned and the underprivileged, the vulnerable infirm and elderly exposed to covert euthanasia, the victims of human trafficking, new forms of slavery, and every form of rejection.”…The threat of abortion remains our preeminent priority because it directly attacks life itself, because it takes place within the sanctuary of the family, and because of the number of lives destroyed. At the same time, we cannot dismiss or ignore other serious threats to human life and dignity such as racism, the environmental crisis, poverty, and the death penalty. (Forming Consciences for Faithful Citizenship, Introductory Note)

Reflection:
1. Access to abortion is one of the most divisive issues in American society and, inevitably for Catholics, a central issue in discernment about voting. The study How American Understand Abortion linked below arrives at several conclusions about the state of discourse about abortion in the United States. One is “Americans can enter conversations about abortion by provisionally setting aside “pro-choice” and “pro-life” labels and the perceptions they carry.” Enter into a time of prayer. However you identify yourself, what pre-conceptions arise in you when you hear a person identified as “pro-choice” and “pro-life?” What experiences have you had that led you to those preconceptions? Are they fair and fact-based? Have you done the personal research to find out? Be in prayer with someone who holds the opposite stance on abortion than you. What concerns of theirs do you share in common?

2. Another conclusion of the study: “Americans can enter conversations about abortion around abortion, through talk of relationships, economics, health, parenthood, social support, jobs, inequality, and more.” Hold in prayer some who has had an abortion, perhaps someone you know personally. How did each of these factors enter into the decision?

Deeper Dive:
• Find attached the Equally Sacred Priorities document of NETWORK that rates the presidential candidates of the two major parties, President Donald Trump, and Vice president Joseph Biden on the variety of life issues that Pope Francis calls “equally sacred.”
• Read the landmark study How Americans Understand Abortion from the McGrath Institute for Church Life of the University of Notre Dame.

Prayer:
Loving God, Open our hearts to those most in need:
The unemployed parent worried about feeding his or her children.
The woman who is underpaid, harassed, or abused.
The Black man or woman who fear for their lives.
The immigrant at the border, longing for safety.
The homeless person looking for a meal.
The LGBT teen who is bullied.
The unborn child in the womb.
The inmate on death row.
Help us to be a nation where every life is sacred, all people are loved, and all are welcome.
Amen.
Fr. James Martin, S.J.

Courtesy of the Sisters of Charity of Saint Elizabeth, Convent Station, N.J.