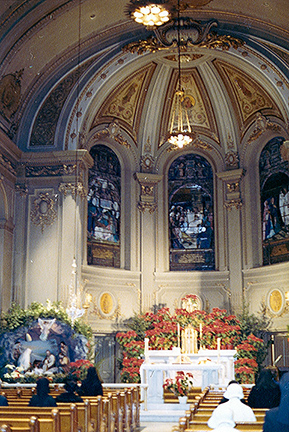 What Christmas traditions do you remember? Were they part of Advent, Christmas, or “Little Christmas” on January 6? Were they about food, decorations, or simply how you celebrated the birth of Jesus? At the Congregation gathering on December 7, Sisters and Associates were asked to recall some of their traditions. Here is what they shared:

Universal to most was the “surprise” that Sister Novices had for postulants on Christmas Eve. The Novitiate chapel was closed most of the day, so it was obvious that something was going on in there. Some postulants believed that their families were hiding behind closed doors while others believed that the room contained Christmas presents stacked up high. The unveiling happened before (or after?) Midnight Mass, when all were invited in to see a life-sized creche and figurines depicting the Nativity scene. Everyone recalled Midnight Mass and the Mother General walking up the aisle carrying the Infant Jesus. “Oohs” and “aahs” could be heard throughout the chapel!

Many remembered setting up Advent wreaths. Some families created an Advent calendar that included performing an act of kindness for someone every day of the Advent season. In large families, the tradition of Silent Santa provided a gift for each family member. School children were often part of Christmas pageants, so parents created angel, shepherd, and three kings’ outfits. Being selected to play Mary or Joseph was certainly special! Some remembered wearing the pageant costumes for Christmas Eve or Christmas Day family gathering.

Remembrances about holiday meals were aplenty! In the Italian tradition, Christmas Eve involved the preparation of the “Seven Fish” meal. Traditionally, Christmas Eve was a day of fasting so the meal included many dishes without meat: filet of sole or flounder, crab, “baccala” or cod (usually prepared as a stew), salmon, clams on the half shell —sometimes served with spaghetti— (usually not lobster, although that might be a nice substitute today!), calamari, and scallops. In the Italian tradition, arancini (rice balls stuffed with cheese and meat) was not prepared until the family returned home from Midnight Mass.

Some families created Gingerbread Houses. Those whose heritage included the United Kingdom remember a Christmas cake made of marzipan, fruits and nuts. Italian Panettone is often given as a Christmas gift for families and friends.

If the family was large, there was a grown-up table and a kids’ table. It was usually a feat to be seated with the grown-ups…although some still preferred being with cousins, brothers, and sisters.

Many honored an Irish tradition wherein families placed a tall, thick candle on the sill of the largest window after sunset on Christmas Eve. The candle burned all night as a welcoming light for Mary and Joseph.

The Christmas tree was usually “real” with lots of tinsel and homemade ornaments —often made by the school-age children— decorated with cranberry and popcorn strung as garland. If families were brave enough to “fight with the lights,” they were strung around the tree for an added warm glow! The tallest person in the household, often Dad —or the youngest hoisted up— placed the star or the angel on top of the tree. In some families, the children did not participate in the decorating of the tree; they believed Santa did it when he came to visit on Christmas Eve.

Wreath making traditions included decorating wreaths with ornaments, pinecones and poinsettias. The wreath scent was always the best part of the activity! Others remembered creating wreaths from candies and candy canes.

Stocking were hung on mantels; those without mantels thumbtacked stockings to a wall near the tree. Placing an orange in the toe gave the stocking some form and helped encourage Mom to make breakfast after presents were opened on Christmas morning.

Everyone remembered the Christmas movies, most especially the black and white version of The Miracle on 34th Street, It’s a Wonderful Life, and A Christmas Carol—the original with Reginald Owen or George C. Scott.

Memories of taking a trip into Manhattan during Christmas week were shared by many. Destinations included the tree at Rockefeller Center, Horn and Hardart Automat, or Howard Johnsons. If they were lucky, they got to stand on the interminable line at Radio City Music Hall to see the Christmas Show and a featured movie. Those who saw the show were always amazed to see the live animals prance across the stage and the beautiful formation of a cross, staged by the angels with lilies bowing in front of the manger.

Recalling Advent and Christmas family traditions created much happy chatter among Sisters and Associates. What were some of your traditions? We’d love to hear them!