New York Foundling Kicks Off Celebrations For 150 Years of Nurturing 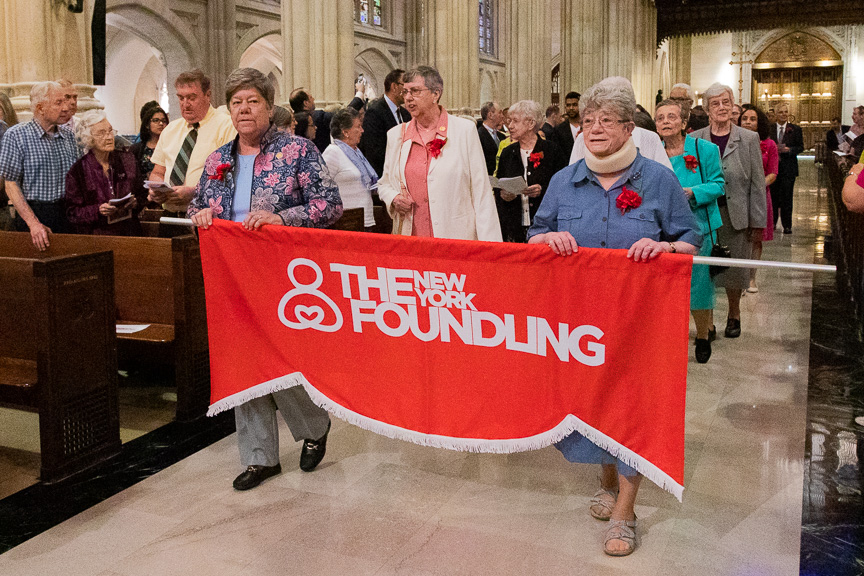 One of the Church’s sacred missions is to provide a home, “a home for worship, a home for life, a home for love,” Cardinal Dolan said in welcoming remarks at the Mass he offered for the New York Foundling’s 150th anniversary.

“And what we’re celebrating is that the Foundling has done that in a radiant way” for a century and a half, said the cardinal at the afternoon liturgy June 6 at St. Patrick’s Cathedral.

In 1869, three Sisters of Charity opened their doors to save the lives of babies being abandoned on the streets of New York. Since then, the sisters’ ministry has continued to evolve from a respite home for abandoned children, to a comprehensive spectrum of community support services designed to empower vulnerable children and families of New York.

The Foundling serves more than 30,000 children and families annually in New York City’s five boroughs and surrounding counties, and in Puerto Rico.

Before Mass, Bill Baccaglini, president and CEO of the Foundling, shared with CNY his reflections on the Foundling’s milestone. The institution the sisters started, he said, “is thriving” and “is one of the largest not-for-profit agencies in New York City.”

Baccaglini said he and Sister Jane Iannucelli, S.C., president of the Sisters of Charity, “had a long conversation about what we, the Foundling, needed to do, and so we opened up a program” for unaccompanied minors about five years ago. “The need today for a program like that has never been greater.

“The sisters follow their heart and they won’t let anything get in the way of doing what’s right.”

After the Mass, Sister Jane spoke with CNY. She worked in the Foundling in the 1980s for nine years.

“From the very beginning, where there was a need, we went,” Sister Jane said of the Sisters of Charity. Her prayers for youngsters in 2019 are that “children everywhere, that they may be well cared for, that they may have all that they need to be able to grow into their own selves, that abuse and trafficking and all kinds of the horrors that children suffer could be brought to an end by the men and women, the sisters who will do everything they can to help our children.”

Ava Gallo, 18, granddaughter of a late foundling adoptee, was one of the liturgy’s leaders of song. A member of St. Columbanus parish in Cortlandt Manor with her parents, Anthony and Vivian, Miss Gallo attends Ithaca College, where she is studying vocal jazz and speech pathology.

“It was definitely an amazing experience to be a part of the celebration for such an amazing organization that does so much,” she told CNY after the Foundling Mass. “We’re very close to it, because of grandma,” Rose Marie Richicci Gallo.

Anthony Gallo, Miss Gallo’s father, is a member of the Foundling’s board of trustees. His late mother was adopted through the Foundling at age 4. She grew up, married and raised a family at SS. Philip and James parish, the Bronx. Today that family includes six children and six grandchildren.

“The Mass was beautiful,” Anthony Gallo said. “I think she would think that it’s an amazing tribute to such wonderful people that care so well for children, and have such an overwhelming concern that children are placed in loving families so that they can go on to have their own families and be as loving as the care that they had while they were left at the Foundling.”

At the conclusion of the liturgy, Cardinal Dolan suggested that attendees, “if you want a real treat,” visit the St. Elizabeth Ann Seton Shrine, one of the cathedral’s side altars.

“It would be a great tribute if you’d go whisper a little prayer of gratitude to God through the intercession of St. Elizabeth Ann Seton,” the foundress of the Sisters of Charity.

The Mass kicked off the Foundling’s anniversary homecoming weekend in Manhattan, which included a Reunion Day at New York University’s Kimmel Center June 7 and a block party outside the Foundling’s Chelsea headquarters June 8. An Oct. 2 gala at the Plaza in Manhattan will cap the celebrations.