“Sister Rose Maureen will long be remembered by her students and their parents for the love of learning, which she imparted in the classroom, and her compassion and kindness as a counselor.” 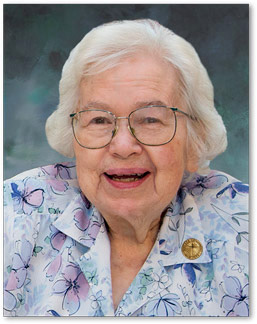 Sister Rose Maureen Dormer (Margaret) was born on April 5, 1925 in Shamokin, Pennsylvania. She was one of five children of Kyran and Rosemary Feori Dormer. Margaret attended Saint Joseph School and Saint Edward High School in Shamokin. She worked for two years as a book- keeper before entering the Sisters of Charity of New York on September 8, 1945. Sister Rose Maureen earned her BA in History from the College of Mount Saint Vincent and her MA in Counseling and Psychology from Manhattan College.

Beginning her ministry in the field of elementary education, Sister Rose Maureen first taught in Saint Agnes School, Manhattan, followed by Saint Barnabas Elementary School in the Bronx. She returned to Saint Agnes School for one year before being sent to Saint Peter School in Poughkeepsie. She was then assigned as Principal of Saint Mary Star of the Sea, Brooklyn, followed by Principal of Saint John School, White Plains, Our Lady of Mercy School, Port Chester, and Saint Joseph School, Yonkers. In 1970, Sister became a Guidance Counselor, first in elementary school, working in Saint Mary School and Saint Joseph School, both in Yonkers. She then moved into the position of Guidance Counselor on the secondary level in Trinity High School, Shiremanstown, Pennsylvania, and then Saint Barnabas High School in the Bronx. In 1996, after almost fifty years in education, Sister Rose Maureen retired to Holy Trinity Convent in Mamaroneck. While living in the parish Sister was involved with the parish life in many ways. In 2002, Sister moved to the Convent of Mary the Queen where she continued her ministry of prayer, service and witness until 2015. At this time, she and a group of Sisters moved to Kittay House in the Bronx where they continued their ministry.

Sister Rose Maureen will long be remembered by her students and their parents for the love of learning, which she imparted in the classroom, and her compassion and kindness as a counselor. She loved community and brought great life and a keen sense of humor to those with whom she lived and worked. We rejoice with her now as she enters into the peace and joy of the kingdom, greeted by her family, the Sisters of Charity who have gone before her, and her loving God whom she served so long and so well. Be at peace, Sister Rose Maureen.