Sister Mary was a quiet, compassionate and generous person. Both her patients and her students were impressed by her kindness and caring. 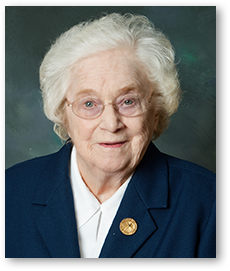 Sister Mary T. Boyle (Sister Dominic Marie) was born September 30, 1924, in Bayonne, New Jersey, one of three daughters and one son born to Hugh and Helen Dugan Boyle. Mary attended Saint Mary Star of the Sea in Bayonne and Bayonne High School. She then studied nursing at the Bayonne Hospital School of Nursing, received her NYS Certification, and worked for several years before entering the Sisters of Charity of New York on February 2, 1950. Sister Mary earned a BSN from Saint John’s University and an MS in Nursing Education from New York University.

Sister Mary spent nearly fifty years in the ministry of Nursing and Nursing Education. In 1952, Sister was missioned to Saint Vincent Hospital, Harrison, where she was both a Nursing Supervisor and a Nursing Instructor. In 1964, she was sent to Saint Vincent Medical Center, Manhattan, where she filled many different roles: staff nurse, nursing instructor, Assistant Administrator and Supervisor. Of her ministry, Sister Mary is quoted as saying, “What is important to me is to try to bring the message of the healing Christ to people. It is in the sharing of the Eucharist daily that I find the energy to carry out my mission in health care.” She retired in 1999 but continued working as a volunteer in Saint Vincent Medical Center. In 2008, Sister Mary moved to Mount Saint Vincent Convent, and three years later to the Convent of Mary the Queen. In 2014, she and a small group of sisters moved to Saint Patrick’s Home in the Bronx.

Sister Mary was a quiet, compassionate and generous person. Both her patients and her students were impressed by her kindness and caring. Sister Mary loved nursing, her family and the sisters with whom she lived and worked. She always had a smile and a listening ear for anyone who might need to be heard. We rejoice with you now, Sister Mary, as you are welcomed home by our loving God whom you served so long and so well. Be at peace.