Never before have I realized the impact the presence of a Sister of Charity could bring. 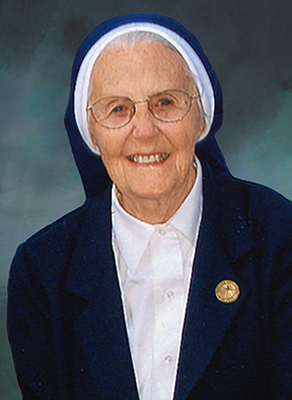 Sister Mary Richard Rowley (Margaret Mary) was born January 16, 1922 in Manhattan, the sixth of eight children—four daughters and four sons—of John and Mary O’Connor Rowley. Margaret attended Saint Alphonsus School and Cathedral High School, both in Manhattan. For a few years she worked in the government division of the railroads that routed US troops throughout the country during World War II.  She then entered the Sisters of Charity of New York on September 7, 1945. Sister Richard earned a BA in History from the College of Mount Saint Vincent.

During Sister Richard’s forty-six years in the ministry of education, she taught every grade in elementary school, as well as religion and history on the high school level. Her first mission was Saint Mary’s in Yonkers, followed by Blessed Sacrament in Manhattan. Throughout the rest of her years in education, Sister Richard taught in the following schools: Saint Augustine, Blessed Sacrament, and Elizabeth Seton Academy, all in the Bronx; Saint Gabriel, New Rochelle; Saint Mary, Saint Peter High School for Girls, and Our Lady Star of the Sea, all on Staten Island; Our Lady of Mercy, Port Chester; Saint Mary, Wappingers Falls; Saint Francis of Assisi, Mount Kisco; Saint Gregory the Great, Harrison; Resurrection, Rye; and Saint Patrick, Manhattan. Upon retiring from education, Sister Richard became a volunteer in parish ministry, working in the food pantry of Immaculate Conception Parish on Staten Island, and preparing students for the Sacrament of Confirmation. In 2004, she moved to Fort Lauderdale, Florida, to assist with pastoral ministry at Saint Sebastian Parish. Sister Richard returned to New York in 2012 to live at the Convent of Mary the Queen in Yonkers. In 2014, she was among the first group of sisters to move with the retirement community to Kittay House in the Bronx.

Sister Richard and her long-time friend, Sister Marguerite McGilly, were missioned on Staten Island when the 9/11 tragedy happened. The sisters watched as events unfolded from the waterfront near Immaculate Conception Parish. For weeks following 9/11, the sisters went to the waterfront each day after school and were a presence to all those who gathered, listening to them, and crying and praying with them. Sister Richard said, “Never before have I realized the impact the presence of a Sister of Charity could bring. Each day we would hear, ‘Hey, guys, look, the sisters are here.’ The strength and courage that got us through those days was the knowledge that each sister was bearing our burdens, and that the love we were able to give flowed from all.”

Sister Richard is remembered as kind and compassionate, and a loyal friend. She gave her all to students, parishioners, and Staten Islanders affected by 9/11. We rejoice with her now as she is welcomed into the arms of our loving God whom she served so well as a Sister of Charity.

Be at peace, Sister Mary Richard.