Those who crossed paths with Sister Mary Kilmartin may count themselves as very fortunate indeed. She sought excellence in education and taught her students to do the same. 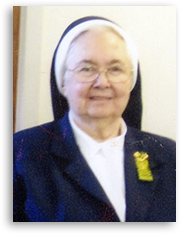 Sister Mary Kilmartin (Sister Grace Michael) was born November 15, 1932 in Bronx, New York, one of two daughters of Michael and Alice McKnight Kilmartin. Mary attended Saint Gregory the Great School and Cathedral High School in Manhattan before entering the Sisters of Charity of New York on September 8, 1950. Sister Grace Michael earned a BA in Spanish from the College of Mount Saint Vincent and an MA in Spanish from Catholic University of America in Washington, D.C.

Sister Mary’s ministry in education spanned fifty-six years and took her from elementary grades through high school to the highest levels of school administration. She taught at Saint Denis School, Yonkers, and Saint Athanasius School, Bronx. She was then missioned to Blessed Sacrament HS, Manhattan, where she taught Spanish and English. Sister was then transferred to Resurrection Academy, Rye, where she taught Spanish. In 1967, Sister Mary returned to her alma mater and thus began her thirty-two years of service at Cathedral High School. She first was a teacher of Spanish, then became Dean of Students, Academic Dean, and then Principal. Sister Mary held this position from 1983 until 1999. Her next challenge was as Associate Superintendent of Schools for the Archdiocese of New York.

In 2004, when she was awarded the Elizabeth Ann Seton Compassionate Educator Award, it was said, “She’s the quietest behind-the-scenes troubleshooter in creation! Problems with parents, with principals, with faculty—Sister Mary’s been through them all … and with her colleague, supporter and friend, Sister Eileen Regina Leonard, Sister Mary has moderated the Glee Club, Drama Club, the Chorus, the Band and educational trips to every part of Europe.” Sister Eileen Regina and she also found time to teach adult education Spanish classes in the evening at Our Lady of the Angelus Parish in Rego Park, Queens. In 2011, Sister Mary retired and moved to Mount Saint Vincent Convent.

Those who crossed paths with Sister Mary Kilmartin may count themselves as very fortunate indeed. She sought excellence in education and taught her students to do the same. Her kindness, compassion, sense of humor, and openness to all were but a few of her many gifts. She loved life and education and was a wonderful friend and community-minded person.

As a Sister of Charity Sister Mary lived the virtues of humility, simplicity, and charity throughout her life. She now enters her eternal promise, welcomed by her family, friends, the Sisters of Charity who have gone before her, and our loving God whom she served so long and so well. Rest in peace, Sister Mary.