Her kindness, compassion, love of all God’s people, and sense of humor made her someone with whom people could talk easily. 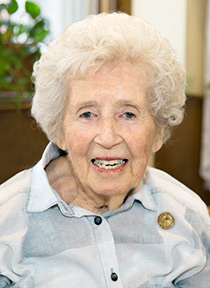 Sister Jane Maria Hoehn (Elizabeth Jane) was born in Ridgewood, Queens, on March 25, 1924, one of two daughters of George and Marguerite Ahearn Hoehn. Elizabeth attended PS 88 in Queens, Franklin K. Lane High School in Brooklyn, and Queens College of the City University of New York before entering the Sisters of Charity of New York on February 11, 1947. Sister Jane earned her BS in Spanish from the College of Mount Saint Vincent and an MSS in Social Work from Fordham University. She later earned her NYS permanent certification in Social Work and a license for Social Work in Puerto Rico.

Although Sister Jane’s first mission was teaching third grade at Holy Trinity School in Manhattan, it was her next assignment at Saint Agatha’s Home in Nanuet that led to her lifelong devotion to social services. From 1951 until 1973, Sister Jane served in a variety of roles at Saint Agatha’s Home as group mother, social worker, director of social service and director of community services. In 1973, the New York Foundling opened an office in Hato Rey, Puerto Rico, under the supervision of Sister Jane. Her main focus was to assist foster families and children who had returned to live in Puerto Rico. After her retirement in 1998, Sister returned to New York City after serving the children and families of Saint Agatha’s Home and the New York Foundling for forty-seven years. She continued to volunteer her talents and expertise as a social worker. In 2011 she moved to the Convent of Mary the Queen where she lived until 2014, when she was among the first group of sisters to move to Kittay House in the Bronx.

Sister Jane was a social worker par excellence. Her kindness, compassion, love of all God’s people, and sense of humor made her someone with whom people could talk easily. Her knowledge and willingness to assist those who needed help made her a very trustworthy person to the people she served. We rejoice with her now as she is welcomed into her eternal home by her family, friends and the Sisters of Charity who have gone before her. Rest in peace, Sister Jane.