With her quiet strength and thoughtful nature, Sister Helen dedicated a total of 45 years to the special call of child care service to the poor with humility and expertise. 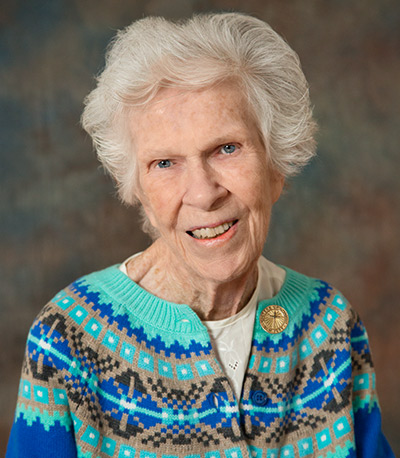 Sister Helen Murphy (Sister Marian Jeanne) was born July 8, 1923 in Yonkers, New York, one of two daughters and three sons of John and Juliette Calle Murphy. Helen attended Holy Trinity School and High School in Teaneck, New Jersey. She earned a BA in Social Studies from the College of Mount Saint Vincent before entering the Sisters of Charity of New York on September 8, 1944. Sister Marian Jeanne later earned a Masters in Social Work from Fordham University and permanent NYS certification in Social Work.

Sister Helen began her ministry in education, teaching at Holy Cross Academy and Saint Gabriel, both in Manhattan. She then spent a year at Saint Joseph Hall, Brooklyn, as a group mother for children in the seventh and eighth grades. In 1950, Sister Helen began a long history with the New York Foundling Hospital. She became the Assistant Director of the Boarding Department and then an intake worker in Mothers’ Social Services. In 1963, Sister Helen became the Director of the Boarding Department, followed by Assistant Administrator of the New York Foundling Hospital. In 1968, she became Administrator of Saint Agatha Home, Nanuet, a position she held for seven years. She spent the next five years as a special consultant working to facilitate the merger of the New York Foundling and Saint Agatha Home. This required great skill and knowledge for the careful understanding of city, county, state, and federal regulations. In 1981, Sister Helen returned to the NY Foundling as Associate Executive Director, followed by Executive Director from 1988 until 1996. In her retirement years, Sister Helen became active in the Venture Foundation where she helped write a book about its history and works.

With her quiet strength and thoughtful nature, Sister Helen dedicated a total of 45 years to the special call of child care service to the poor with humility and expertise. Sister Helen was a faithful Sister of Charity and daughter of Elizabeth Seton. She is now with her family, friends, and the Sisters who have gone before her, in the presence of a loving God whom she served so long and so well. Rest in peace, Sister Helen.

← Remembering Our Sisters on All Souls Day In Memoriam: Sister Rita Meaney, SC →