“Throughout her years of ministry Sister Anne Mary was known as a kind, concerned and compassionate nurse. She was much-loved by her patients, students, co-workers …” 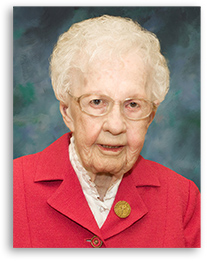 Sister Anne Mary Regan (Genevieve C.) was born November 4, 1911 in Bridgeport, Connecticut. She was one of five daughters and six sons born to John and Ann Gilbert Regan. After attending Saint Mary School and Warren Harding High School in Bridgeport, Genevieve came to New York City to attend Saint Vincent’s Hospital School of Nursing from which she graduated in 1932. She earned her NYS Certification as a Registered Nurse and worked for four years before entering the Sisters of Charity of New York on September 8, 1936. Sister Anne Mary earned a BS in Nursing Education from the Catholic University of America and an MA in Nursing Administration from New York University

After twenty-six years, Sister Anne Mary was transferred to Saint Vincent’s Hospital, Harrison, as the Assistant Administrator, a position she held until 1982. She remained at the Westchester Branch of Saint Vincent’s Hospital as the Director of Purchasing for thirteen years and then in charge of Community Relations for the next five years. In 2000 Sister Anne Mary retired from active ministry but continued as a volunteer at Saint Vincent’s. In 2009 Sister moved to the Convent of Mary the Queen where she lived until 2015 when she moved with a group of sisters to Schervier Nursing Care Center in Riverdale.

Throughout her years of ministry Sister Anne Mary was known as a kind, concerned and compassionate nurse. She was much-loved by her patients, students, co-workers and the sisters with whom she lived. She has been honored with awards several times by Saint Vincent’s Hospital, Westchester, and, in 2008, a residence for women was named in her honor. Sister Anne Mary was an avid Yankees Fan and thoroughly enjoyed attending and watching as many games as possible. She is also known for dancing the Charleston into her 100th year! She always had a smile and a kind word for everyone she met. Now she is welcomed home into the loving arms of the God she served so long and so well. Rest in the everlasting joy of our God, Sister Anne Mary.