Lent is over and we begin the Easter triduum. Let us take a few minutes to examine our Lenten journey. Hopefully we were able to see what God sees in us and how we are the beloved in God’s eyes. This evening we enter into the three mos unique days in the Christian calendar. These days will call us to contemplate the humanity of Jesus—his humility and suffering—and enter into the hearts of his early followers who knew fear, dread and loss. 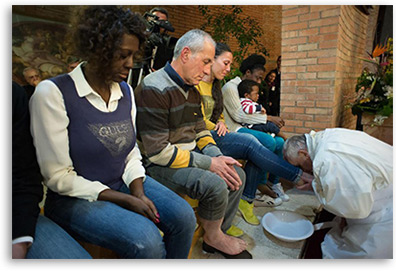 Pope Francis washes the feet of detainees and inmates at the Rebibbia Prison off of the Via Tiburtina in Rome, Italy on Holy Thursday, April 2, 2015. © L’Osservatore Romano

How do we arrive at this celebration? What anxieties and expectations are in our hearts?  How did the apostles arrive? Take a few moments to recall what has been happening in the world, the church, the congregation, in us just since Ash Wednesday. What are we feeling; what do we need from these next three days? Now let us think of the apostles. They must have been especially pleased by the honor shown to Jesus on his entry into Jerusalem. This would be the perfect setting now for Jesus to announce the beginning of his earthly kingdom, and as members of his intimate circle, were they expecting an answer to who would be the greatest in that kingdom? From other accounts in the gospels we know they had a problem with pride and self-exaltation. Jesus had tried to teach them about humility and now time is running out. Jesus shows by his own example the humility they needed to learn, especially for the future of their lives together and their ministry in the world. This is a community that Jesus has been forming which needs to take a more definite shape and understand graphically that they are called to humble, self sacrificing love.

The gesture had to strike the apostles as odd because foot washing in that era occurred when guests arrived at the house and before the meal. It was done by a servant to help guests feel comfortable after walking on dusty roads in sandals. Jesus, the Master and Teacher, washes their feet during the supper and in silence it seems (they may have been too stunned to speak) except for the interchange between Jesus and Simon Peter who objects to having his feet washed. When Jesus returns to his place at table, he explains what has happened. Whatever perceptions of status there might have been among them, Jesus calls them to put all that aside and wash each other’s feet. Sandra Schneiders, IHM, believes that the act of Jesus is not so much that the Master has become the slave, but that in calling us to do the same for each other, we are all equal friends in the kingdom, and nobody is greater or lesser.

Timing is everything. How many roads had they walked together, and yet Jesus waits until nearly the end of his life to wash their feet. Will they understand better after they experience betrayal, denials, death, resurrection, and the strength of the Spirit? Does the Triduum this year come just at the right time in our lives?

Read John chapters 13–17 this evening. This may help to experience the full impact of this memorable Supper. Imagine the feelings of the apostles as they hear consoling but frightening words from Jesus. What are they facing? What and how will they understand? The opening verse in Chapter 13 sets the scene for these chapters… “He loved those who were his own in the world and he loved them to the end.” (John 13:1)  Love is the one key term occurring 31 times in these 5 chapters. Chapter 17 ends with Jesus praying to his Father: “that the love with which you have loved me may be in them, and I in them.” (John 17:26)

Love gathers us together these next three days:
“Where charity and love are, God is there
Christ’s love has gathered us into one.”

Sr. Dominica, most recently a member of the Congregation’s leadership team, has ministered in education as a teacher, principal, and in administrative positions in the archdioceses of New York and Newark, NJ. In Newark, she served as Superintendent of Schools and Secretary for Education.