JUNE 3, 2018 — Solemnity of the Most Holy Body and Blood of Christ (Corpus Christi) 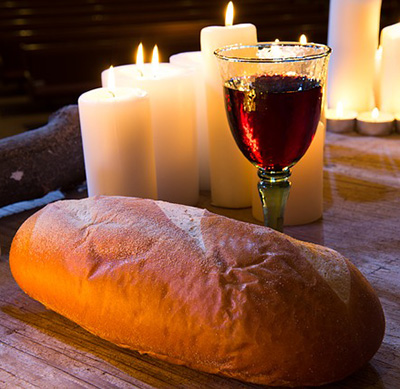 This verse from today’s psalm resonates with much in my life, particularly my experience of Corpus Christi in 2016. That summer I was assigned to work with a US Army unit in Italy. Having weekends free and realizing that Elizabeth Seton had arrived in Baltimore on that feast in 1808, I chose that day to visit Livorno. Livorno was a pivotal place in Elizabeth’s life: source of pain and grief due to William’s death, yet font of so much grace due to the love from the Filicchi family. Their hospitality during her grief and their witness to their Catholic faith started Elizabeth’s conversion to Catholicism.

I went seeking insight about a historical figure, but I found a living connection. The ongoing love and witness of the pastor and parishioners of the Parish of Saint Elizabeth Ann Seton in Livorno bridged a two-century, two-continent gap. The bridge on the New York side was anchored by Sisters Irene Fugazy and Regina Bechtle. At Sr. Irene’s recent wake, Sr. Regina described her passion for Elizabeth and the bonds she forged with Don Gino, pastor in Livorno and a fellow scholar of Elizabeth. In turn, it was Sr. Regina who introduced me to the Livorno anchors, Don Gino and his English-speaking parishioner and co-author, Lara Bellagotti. Through Lara and Don Gino, I was introduced to the Conte family. After liturgy, Marco and Antonella Conte and their daughters Chiara and Elenora treated me to a delicious lunch in their home. We then headed downtown for the afternoon’s Corpus Christi procession. Walking the several blocks from the church of San Sebastiano to the cathedral, I felt transported in time, following a path Elizabeth might have walked in a procession that would have been old even in her day. Over several more visits, Don Gino and the Conte’s became an adopted family and we retraced Elizabeth’s footsteps throughout the region. 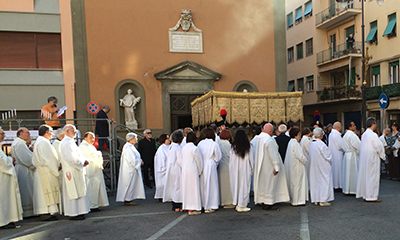 Corpus Christi 2016 opened me to new relationships with Elizabeth, friends in Italy, Sisters of Charity, and God. As I watch the often troubling news from around the globe, I find hope in the realization that those reports, though pervasive, are not the full story. The Feast of Corpus Christi celebrates God’s covenant with us and our unity with each other. The love I encountered that summer and the bonds we created are powerful counter-examples to the reports of hatred and separation. May we all seek out and strengthen those bonds so we too can celebrate with the Psalmist.

Lisa Shay is an Associate of the Sisters of Charity of New York and the Electrical Engineering Program Director at West Point. She and her husband Jeffrey have six wonderful children, aged 9 to 24.