…she taught more than English; she taught values from life’s experiences, how to learn, how to form intelligent opinions and how to discipline ourselves. 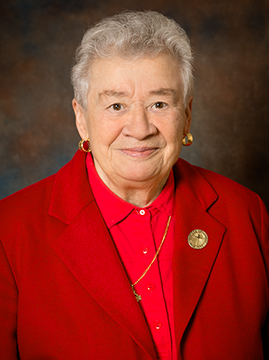 Sister Veronica Liegey (Sister Maria Veronica) was born January 28, 1933, in Far Rockaway, New York, one of fifteen children —five daughters and ten sons— born to Gabriel and Veronica Webb Liegey. Veronica Gabrielle attended Saint Mary, Star of the Sea Elementary School in Far Rockaway and divided her high school years between Far Rockaway High School and Saint Savior High School in Brooklyn. She attended the College of Mount Saint Vincent, graduating with a BA in French, and taught for a year before entering the Sisters of Charity of New York on September 8, 1957.

Sister Veronica served for fifty-five years of active ministry as an educator on the elementary and high school level and in parish ministry. Her ten years of teaching elementary grades included Holy Name, Saint Francis Xavier and Immaculate Conception, all in Manhattan.

Her twenty-six years teaching high school English began at Saint Gabriel in New Rochelle, and the next twenty-five years continued at Cardinal Spellman in the Bronx as a teacher of English 9 and 10 and Advanced Placement English.

After thirty-six years in education, Sister Veronica accepted her pastor’s invitation to initiate a program for seniors, both homebound and able, in Our Lady of the Assumption Parish in the East Bronx. Sister Veronica devoted her next nineteen years to this ministry.

In 2015, Sister Veronica retired and lived at Mount Saint Vincent Convent until she joined the community at Cabrini of Westchester in Dobbs Ferry. It is here she died on April 24, 2021, in her sixty-fourth year of commitment as a Sister of Charity of New York.

Sister Veronica excelled as a teacher, particularly of advanced placement courses. A former student noted that she “. . . taught more than English; she taught values from life’s experiences, how to learn, how to form intelligent opinions and how to discipline ourselves.” It is fair to conclude that her love and respect for learning was absorbed in her family circle.

Sister Veronica’s ministry expanded the knowledge of the senior members of her parish through the many travel opportunities within and outside the country that she offered them. Anyone who knew Sister Veronica well knew a woman of integrity, a lover of beauty, and a seeker of matters of the soul.

Sister Veronica, Jesus reminds us that in his Father’s house there are many dwellings where he prepares a place for us so that we may be where he is (John14:2–3). In this sure faith, we rejoice as you are welcomed home by our loving and merciful God. Be at peace.