Like Jesus, Sister taught with compassion and put her students’ needs first. 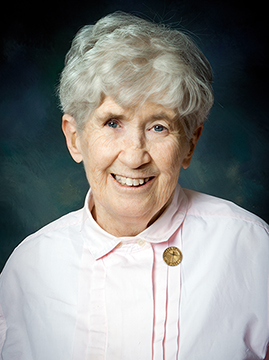 Sister Thérèse Maria Dunne (Claudia Thérèse) was born April 30, 1934, in Manhattan, one of three children—two sons and a daughter—of William and Ellen Condren Dunne. Claudia attended Visitation School, Bronx, Cathedral High School, Manhattan, and studied for two years at Hunter College before entering the Sisters of Charity of New York on September 8, 1953. Sister Thérèse Maria earned her BA in Mathematics at the College of Mount Saint Vincent and her MA in Mathematics at Villanova University in Pennsylvania.

Sister Thérèse Maria served forty-four years in education: twenty years in the classroom and twenty-four years in educational support services.  She taught the lower grades at Saint Peter School, Haverstraw, Holy Name School, Manhattan, and Blessed Sacrament School, Staten Island. She was later assigned to York Catholic High School, York, Pennsylvania, and Saint Gabriel High School, New Rochelle. Sister Thérèse Maria then used her computer skills as an Educational Coordinator in the Data Systems Center of the Archdiocese of New York, Yonkers. In August 1998 she accepted a position as an Administrative Assistant at Archbishop Stepinac High School, White Plains.  She followed this with another two years as secretary in the Provincial House of the Salesian Fathers, New Rochelle.

Throughout her retirement Sister Thérèse volunteered her services at Sound Shore Hospital, New Rochelle, until she moved to the Convent of Mary the Queen, Yonkers, in 2005. In 2014 she moved to form a retirement community with her sisters at Kittay Senior Apartments, Bronx, until she died there on October 5, 2019.

Sister Thérèse Maria’s students regarded her as an excellent teacher of Mathematics. She had the ability to reach the reluctant math student as well as those who struggled with the subject. Like Jesus, Sister taught with compassion and put her students’ needs first.

Rest in peace, Sister Thérèse Maria. With open arms, God welcomes you home to your place in his kingdom.