To join the video stream of Sister Theresa’s Memory Sharing and Mass of Christian Burial on Tuesday, August 27 at 10:30 , please click on the link: Mount Saint Vincent Convent Chapel = https://venue.streamspot.com/217aa3db

Sister Theresa will be fondly remembered by the many students she taught and counseled and by the persons whose care she guided in the nursing homes where she served. 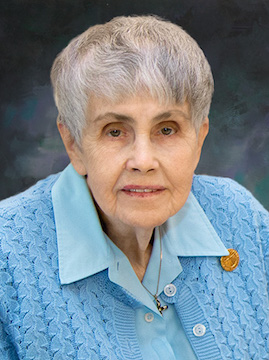 Sister Theresa Mary O’Connor (Sister Miriam Patrick) was born August 20, 1929, in Bronx, New York, one of six daughters and two sons of Thomas and Nora Osborne O’Connor. Theresa attended Saint Jerome Elementary, Bronx, and Cathedral High School, Manhattan, before entering the Sisters of Charity of New York on September 7, 1947. Sister Patrick received her BA in Mathematics from College of Mount Saint Vincent and her MA in Guidance from Manhattan College. In addition, she earned NYS permanent certification for grades K–8, Mathematics grades K–12, Guidance, and a License for Nursing Home Administration in both New York and New Jersey.

Sister Theresa served for forty-six years in active varied ministries. Her first assignments were in the upper grades of elementary education in Saint Francis of Assisi, Mount Kisco; Saint Margaret of Cortona, Bronx; Saint John the Evangelist and Immaculate Conception, both in Manhattan, and Saint Mary, Yonkers. She served as Principal of two elementary schools: Saint Margaret of Cortona and Saint Peter, Haverstraw.

Sister Theresa also taught Math on the high school level at York Catholic, York, PA; Cardinal Spellman and Saint Barnabas, both in the Bronx. She served as Guidance Counselor in Saint Raymond High School for Boys, Bronx, and Cardinal Spellman.

After serving thirty-eight years in education, Sister Theresa applied her Nursing Home Administration License to serve at Schervier Nursing Care Center, Bronx, and Maryknoll Nursing Home, Ossining. She followed this with fourteen years as a caregiver in her family and in volunteer work. In 2010, Sister Theresa moved to the Convent of Mary the Queen and in 2014 was among the first group of sisters to form a retirement community at The New Jewish Home, Bronx, first in the Assisted Living residence and then in Kittay Senior Apartments. Sister Theresa was in residence there when she died August 23, 2019.

Sister Theresa will be fondly remembered by the many students she taught and counseled and by the persons whose care she guided in the nursing homes where she served. Sister Theresa, you are now welcomed by the loving God you served as a Sister of Charity of New York for seventy-two years. Rest in peace.