On the occasion of her 50th Anniversary as a Sister of Charity, Yonkers’ Mayor Philip A. Amicone declared October 5, 2007, “Sister Theresa Luciano Day.” The Proclamation noted the “quality and innovative education and strong foundation” she provided for the many students whom she taught. 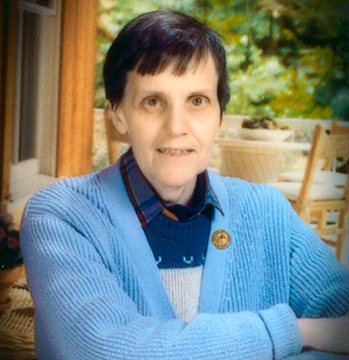 Sister Theresa D. Luciano (Sister Richard Mary) was born October 30, 1937, in Yonkers, New York. She was the only daughter of two children born to Nazzerano and Marie Romano Luciano. Theresa was educated at Saint Mary, Yonkers, Saint John the Evangelist High School, White Plains, and worked as a secretary at Saint Joseph’s Hospital, Yonkers, before entering the Sisters of Charity of New York on September 8, 1957.

Sister Richard received her BA in History from the College of Mount Saint Vincent, Bronx, and her MS in Education from Bank Street College of Education, Manhattan. She later earned NYS Permanent Certification in Education, K–6.

Elementary education was Sister Theresa’s first love and only ministry for fifty years. She taught at Saint Agatha Home, Nanuet, where she also served as a group mother for one year, Holy Trinity, Manhattan, Saint John the Evangelist, White Plains, her alma mater, Saint Mary, Yonkers, and Holy Name, New Rochelle. In 1977, Sister Theresa began working with the “open classroom” teaching method, which was innovative in the late seventies and early eighties. She used this technique when she taught at Blessed Sacrament, Bronx, and Sacred Heart, Dobbs Ferry.

When computer science became part of the elementary school curriculum, Sister Theresa taught it first at Christ the King, Yonkers, Saint Matthew, Hastings, and then at Saint Mary, Yonkers. With the closing of Saint Mary School in 2011, Sister Theresa retired from teaching. However, she continued working with computers and was always ready to help both children and adults with computer challenges.

In 2012, she moved to the Convent of Mary the Queen, Yonkers, and later joined the retirement community of the Sisters of Charity at Schervier Nursing Care in the Bronx. She remained there until her death on December 1, 2020.

On the occasion of her 50th Anniversary as a Sister of Charity, Yonkers’ Mayor Philip A. Amicone declared October 5, 2007, Sister Theresa Luciano Day. The Proclamation noted the “quality and innovative education and strong foundation” she provided for the many students whom she taught. Among her interests, Sister Theresa collected memorabilia from vacationing at the Jersey Shore and Mystic, Connecticut, and she enjoyed assembling and decorating dollhouses.

We rejoice with her now as she is greeted by her parents, friends and the Sisters of Charity who have gone before her. Rest in the peace and joy of our loving God, Sister Theresa.