During her fifty-two years of health care ministry, physicians, staff, patients, and families deeply appreciated her goodness, humor, and fidelity to quality care. 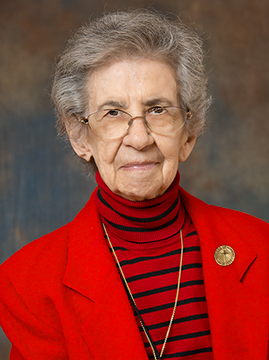 Sister Teresita Duque (Clara Ines) was born January 9, 1928 in Bogotá, Colombia, South America. She was one of three daughters and six sons born to Bernardo and Ines Gonzalez Duque. Clara attended Colegio de la Enseñanza and Colegio de la Presentación in Bogota, and Saint Vincent’s Hospital School of Nursing in Manhattan, receiving her RN in 1950. She worked for four years before entering the Sisters of Charity of New York on February 2, 1954. Sister Teresita received her BSED in Nursing in 1962 and her MS in Nursing Education in 1964 from Hunter College, New York.

Sister Teresita’s first mission was Saint Vincent’s Hospital, Manhattan, where she served for twelve years in the positions of staff nurse, supervisor, and Emergency Room supervisor. For one year she served as evening and night supervisor at Saint Vincent’s Hospital, Harrison, NY.  She returned to Saint Vincent’s, Manhattan, for the next nineteen years, serving again as Emergency Room supervisor, and co-founder, nurse coordinator, and “heart and soul” of the Chelsea Village Program. This program began in the Department of Community Medicine of Saint Vincent’s Hospital when medical teams recognized the needs of the severely disabled and homebound-elderly living in the Chelsea and Greenwich Village areas of NYC. In 1988, Sister Teresita went to the Convent of Mary the Queen, Yonkers, as the Director of Nursing, a position she held for three years, and then worked for one year as an RN for the New York City Chapter of the Multiple Sclerosis Society. From 1992 until 2000, Sister worked as a patient representative at Saint Vincent’s Hospital, Manhattan, and continued as a volunteer in this capacity until she retired to Mount Saint Vincent Convent in 2008. As her health declined, she joined the retirement community at Convent of Mary the Queen and then moved to Kittay Senior Apartments in the Bronx. Sister Teresita celebrated her 65th Jubilee as a Sister of Charity on February 2, 2019, with her Kittay Community.

During her fifty-two years of health care ministry, physicians, staff, patients, and families deeply appreciated her goodness, humor, and fidelity to quality care. She loved her work, the people to whom she ministered, those with whom she served, her family, and her religious community. Sister Teresita’s deep commitment to peace and justice led to active participation in Pax Christi Metro New York and, in 2001, the organization honored her with its Service Award for her consistent support and inspiration for many years.

It was said that she witnessed to the peace of Christ in all she did. Sister Teresita, rest now in Christ’s everlasting peace, as you are welcomed by our gracious God whom you loved and served so long and well.

Note: Sister Teresita’s funeral will be live-streamed on Friday, March 22 at 10 am.
https://venue.streamspot.com/217aa3db

The video will be available for viewing for thirty days.