Sister’s sense of humor, generous heart, and love of community life are memories for those with whom she lived. 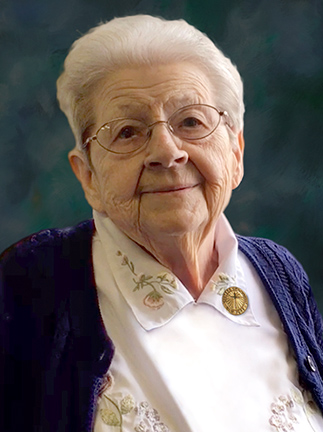 Sister Rosemarie Bittermann (Sister Marie Anthony) was born August 4, 1922, in Saugerties, New York, one of six daughters and one son of Anthony and Catherine Mundus Bittermann. She attended Saint Mary of the Snow Elementary School and Saugerties High School. After graduation, Rosemarie went to New York State College of Teachers in Albany, later SUNY Albany, for one year before entering the Sisters of Charity of New York September 6, 1941. Sister earned a BS in Spanish from the College of Mount Saint Vincent and an MA in Education from Manhattan College. She later received NYS teaching certification for N – Grade 6 and Spanish Grades 7 – 9.

Sister Rosemarie spent close to sixty years in the schools of the Archdiocese of New York, with all but one year in elementary education. She taught at the Academy of Mount Saint Vincent, Bronx; Holy Cross Academy, Manhattan; Seton Academy, Yonkers; and Immaculate Heart of Mary, Scarsdale. In 1954 she was missioned to Saint Mary of the Snow, Saugerties, her alma mater, where she taught for six years. Sister Rosemarie then returned to Manhattan to teach at Our Lady of Mount Carmel and Saint Francis Xavier. In 1968, Sister returned to the Bronx to serve at Saint Barnabas and Nativity of Our Blessed Lady. From there Sister Rosemarie went to Saint Joseph School, Florida, N.Y., where she taught for the next thirteen years. In 1994, Sister volunteered at Saint Peter, Yonkers, for the next eight years, providing various services for the children and school administration. In 2007, Sister retired to Saint Patrick Villa, Nanuet, but with declining health, she joined the sisters at Convent of Mary the Queen in Yonkers. In 2014, she was among the first group of sisters to form a retirement community at what is known today as Kittay Senior Apartments in the Bronx. It is here that she died Ash Wednesday, March 6, 2019.

Always kind and compassionate, Sister Rosemarie will be remembered by the many students she taught, as well as their parents and families. Sister’s sense of humor, generous heart, and love of community life are memories for those with whom she lived. She will also be remembered for her hobbies of solving jigsaw puzzles and crocheting afghans.

Sister Rosemarie was a dedicated Sister of Charity who served God with humility, simplicity and charity. We rejoice with her now as she is welcomed into the loving arms of our God whom she served so long and so well. Rest in eternal peace, Sister Rosemarie.