She was soft-spoken with an easy warm smile, poised and gracious in manner and, even in simple dress, was always elegant in appearance. 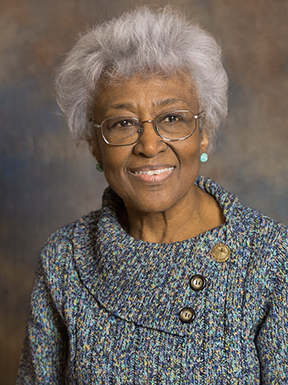 Sister Rose Frederick (Eleanor Bernice) was born February 18, 1936, in Manhattan, one of two daughters of Frederick and Rose Durham Jones. Eleanor attended Resurrection Elementary and Cathedral High School, both in Manhattan, and the College of Mount Saint Vincent where she earned a BA in French. After graduation, she entered the Sisters of Charity of New York on September 8, 1957. Sister Rose later earned an MA in French from Fordham University and, ten years later, an MSW from Hunter College School of Social Work. She was awarded New York State Permanent Certification in Social Work.

Sister Rose Frederick had 52 years of active ministry, 12 as a teacher and 40 years in social work. She taught French at Cardinal Spellman High School in the Bronx, Cathedral High School in Manhattan, and the College of Mount Saint Vincent. Her subsequent years were devoted to the healing ministry of social work at the New York Foundling in Manhattan and, for 34 years, as a social worker/therapist at the Mental Health Clinic of Saint Joseph’s Medical Center in Yonkers.

In 2012, Sister Rose retired from active ministry and went to live with the retirement community at Mount Saint Vincent Convent. In 2017, she moved to Saint Patrick’s Home in the Bronx, where she died on October 28, 2021.

In addition to her active ministries, Sister Rose often was asked to share her gifts and life experiences in other ways. In 1968, she served as the first chairperson of the newly formed Committee of Sisters of Charity for Race Relations and as a panel member of its sponsored workshops. In the mid-1970s, she was invited to join the Board of Trustees of the Riverdale Mental Health Clinic. She became a member of the Board of Elizabeth Seton College in Yonkers in the 1980s and the Board of the College of Mount Saint Vincent in 2005.

Sister Rose found her own ways of relaxing from a busy schedule through her yoga routines, rides in the country —particularly in autumn— and connecting with loyal friends. She was soft-spoken with an easy warm smile, poised and gracious in manner and, even in simple dress, always elegant in appearance. She considered her ministry as a social worker/therapist to be “sacred” and held in respect the private thoughts and experiences that were shared with her.

Sister Rose, whenever you prayed Psalm 27, you professed with the psalmist, “God is my light and my salvation, my life’s refuge.” You asked for just one thing, “… to dwell in the house of my God all the days of my life.” Now a loving God welcomes you to all that you have desired.