“Her students loved her for all she did for them, and many continued to keep in touch over the years. Sister was kind, compassionate and a good listener…” 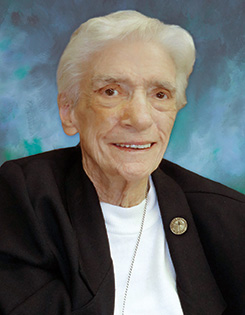 Sister Patrick Regina Sullivan (Catherine) was born on May 16, 1924 in Manhattan, one of two children, one daughter and one son, born to Patrick and Rosella McErelean Sullivan. Catherine attended Sacred Heart School in the Bronx and Cathedral High School before entering the Sisters of Charity of New York on September 8, 1942. Sister Patrick received a BA in History from the College of Mount Saint Vincent and later earned NYS Permanent Certification in Social Studies.

Sister Patrick devoted more than fifty years to the ministry of education. Thirty-seven of those years were in elementary education where she first taught in the primary grades and then moved to grades 6, 7, and 8. Her first mission was to Saint Gabriel School in East Elmhurst, Queens, before being sent to Saint Lawrence Academy, Manhattan. Sister Patrick was then sent to Saint Mary School, Yonkers; and Saint Gabriel and Saint Barnabas Schools in the Bronx. In 1960 Sister Patrick began teaching eighth grade and preparing many students for their high school years. Sister taught in: Saint Emeric School, Saint Joseph Academy, and Saint Ignatius Loyola School, all in Manhattan; Saint Gabriel, Bronx; and Our Lady Star of the Sea School, Blessed Sacrament School, and Saint Joseph-by-the-Sea High School, on Staten Island. Sister Patrick spent nineteen years at Saint Joseph-by-the-Sea High School, and upon her retirement in 2000 the faculty and staff wrote, “We give thanks for having been given the opportunity to work with a woman of faith and conviction. You will be remembered as a teacher, a tutor, a secretary, a cook, a can collector, a “jack of all trades” and an excellent role model.” She moved to Mount Saint Vincent Convent where she continued her various activities and enjoyed the company and presence of her sisters. In 2012 Sister Patrick moved to the Convent of Mary the Queen in Yonkers and in 2014 she was among the first sisters to move to Kittay House in the Bronx.

Sister Patrick Regina was an educator par excellence. She believed in working her students to their full potential and would never let them give up on themselves. Her students loved her for all she did for them, and many continued to keep in touch over the years. Sister was kind, compassionate and a good listener; she had a wonderful sense of humor which was evident to her students, their parents, her co-workers, and all of the sisters with whom she lived. We rejoice with her now as she enters into the presence of our loving God and is greeted, “Welcome home, good and faithful servant.” Be at peace, Sister Patrick.

Mass of the Resurrection
Mount Saint Vincent Convent
Friday, May 1, 2015, 10 am