Sister Patricia volunteered in the food pantry of two local churches, participated in a local senior group, and provided daily acts of kindness to assist her neighbors. 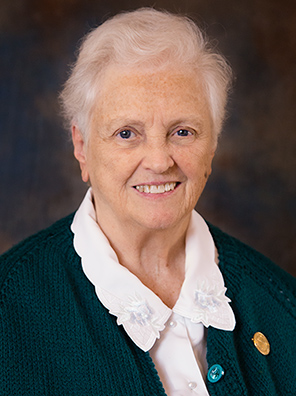 Sister Patricia Maureen Mulryan (Mary Catherine, known as Maureen) was born January 20, 1931, in Bronx, New York. Maureen was one of four children, two daughters and two sons, of Patrick and Delia Wade Mulryan. She attended Saint Francis de Sales Elementary School and Cathedral High School, both in Manhattan, and worked for six months before entering the Sisters of Charity of New York February 2, 1949.

Sister Patricia spent the first twenty-six years of ministry in elementary education, fifteen as a seventh and eighth grade teacher in Saint Paul, Brooklyn, and Elizabeth Seton Academy, Yonkers; eleven as principal of Elizabeth Seton Academy. After receiving her master’s degree in Business Administration in 1979, Sister Patricia served for thirteen years as the Assistant Treasurer and then Treasurer for the Sisters of Charity of New York. She also shared her business acumen next with the Daughters of Divine Charity, serving as their Treasurer for sixteen years.

During her years of active ministry assisting religious congregations to face their financial challenges, Sister Patricia also provided the wisdom that secured structures for their strong financial future. An investment advisor, after meeting with Sister Patricia for the first time, wrote of her, “… it is very clear that Sister Pat is exceptionally skilled at her job as Treasurer.” Additionally, Sister Patricia was a valued member of the Congregation’s Charitable Trust, a board member of the Sisters of Charity Housing Development Corporation on Staten Island, and a consultant for the National Association for Treasurers of Religious Institutes.

Sister Patricia’s membership since 1983 on the board of directors for the Leviticus Fund—a community development fund that extends low-interest loans for housing for the poor—continued into her retirement, as did her involvement in other groups with outreach to the underserved. As a resident of Seton Village, Nanuet, in her retirement years, Sister Patricia volunteered in the food pantry of two local churches, participated in a local senior group, and provided daily acts of kindness to assist her neighbors. Sister Patricia died at the Joe Raso Hospice Residence in New City, New York, on February 9, 2020.

We rejoice with you now, Sister Patricia, as you are welcomed into the love and kindness of God which you witnessed by your daily life to family, friends, and the Sisters of Charity.