Sister Muriel deeply loved Scripture and spared no effort in sharing her enthusiasm with the widest possible audience. 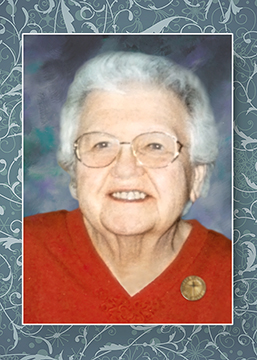 Sister Muriel Theresa Long, formerly Sister Maria Daniel, was born January 16, 1929, in Manhattan, one of four children, two daughters and two sons of James and Catherine Costigan Long. Muriel attended Our Lady of Good Counsel Elementary and Cathedral High School, both in Manhattan, and worked for one year before entering the Sisters of Charity of New York on September 7, 1947.

Sister Daniel received a BA in Mathematics from the College of Mount Saint Vincent in 1957, and an MS in Mathematics from Saint John’s University in Queens in 1962. Twenty years later, she received an MS in Religious Education from Fordham University. She was awarded New York State Permanent Certification for teaching Junior and Senior High School and Certification in Spanish Language from Catholic University in Ponce, Puerto Rico.

Sister Muriel devoted almost half of her fifty years of active ministry to education on the elementary and high school levels. She taught upper elementary grades at Saint Joseph, Yonkers, Saint Paul and Blessed Sacrament, both in Manhattan, Saint Paul in Brooklyn, and was Principal of Saint John the Baptist in Brooklyn, and Saint Emeric in Manhattan. On the high school level, Sister Muriel taught Math and Religion at All Saints Branch of Cathedral High School.

In early1970s, Sister Muriel began her years of pastoral ministry in the religious education of adults and the formation of Catechists and Catholic Lay Leaders. She served as Director of Religious Education at Saint Peter Parish, Haverstraw, and as member of the Parish Ministry Team at Our Lady of Victory, Bronx. She co-founded the South Bronx Pastoral Center, serving as teacher and Program Director, and later became teacher and Director of Religious Formation at Saint Mary Parish, Yonkers.

Throughout her time of pastoral ministry, Sister Muriel developed her skills in Spanish, participating in programs offered by the Archdiocese of New York in Puerto Rico, and immersion programs in Mexico and Spain. Her natural language ability enabled her to both teach and develop bi-lingual courses. She also pursued biblical studies in Rome. Sister Muriel deeply loved Scripture and spared no effort in sharing her enthusiasm with the widest possible audience.

Sister Muriel was a life-long learner. Trips abroad added history and cultural appreciation to her class presentations. She immersed herself in music, literature, and art presented in a variety of genres, which enabled her to be articulate on many topics. Family and close friends speak of her as always encouraging and inspiring them to be their best and to dream “outside the box.”

Sister Muriel, at the beginning of this Advent season we sing, “Come, Thou Long Expected Jesus, born to set thy people free.” Your God and Savior has come to set you free and take you home. Find your rest in the One whose word and love you have brought to so many in your seventy-five years of ministry. Rest in peace.