“She loved her students (“most days,” as she wryly noted), many of whom came from a background of poverty. Sister firmly believed that a good educational foundation was the best preparation for life that she could give them.” 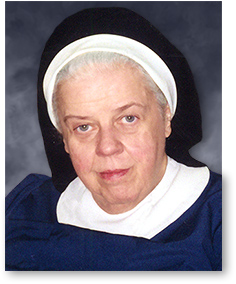 Sister Miriam Roberta Kiernan was born on June 14, 1922 in Jamaica, NY, one of three daughters of Robert and Irene Dillon Kiernan. Miriam attended St. Thomas the Apostle School in Woodhaven, St. Agnes Academic H.S. in Rockville Centre and the College of Mount Saint Vincent, where she was a member of the national honor society, Kappa Gamma Pi.

On September 8, 1944, when she joined the Sisters of Charity, she followed in the footsteps of her aunt after whom she had been named. Sr. Roberta earned her MA in English from Fordham University and later received certification in French and English.

Sister Roberta’s ministry in education began with the primary grades at St. Raymond’s, Bronx, and St. Ignatius Loyola, Manhattan. In 1952 she was sent to teach high school, spending ten years at Blessed Sacrament H.S., Manhattan. She captured the flavor of the school’s racial and ethnic diversity and the students’ positive experience of it in an article published in Interracial Review (April, 1963).

Sister Roberta is most remembered for her long years of service (1962-1996) at Cathedral H.S. where, with professionalism and a trademark sense of humor, she taught English and moderated the school newspaper, The Arbutus.

When she was first missioned to high school someone commented: “Adolescent girls for the rest of your life!” That was truly the calling that Sister Roberta embraced. She loved her students (“most days,” as she wryly noted), many of whom came from a background of poverty. Sister firmly believed that a good educational foundation was the best preparation for life that she could give them.

When Sister Roberta retired, students and colleagues spoke of her quick wit, helpfulness and dedication to excellence. Her passion for teaching continued as she taught English as a second language to domestic and grounds workers at Mount Saint Vincent.

Sister Roberta was known as an avid reader and an interesting conversationalist. Now as she enters the fullness of life in heaven, we can imagine her delight in discovering a universe of new conversation partners. We rejoice with her as she meets the God of Charity whose love she faithfully revealed to all in need, the mark of a true Sister of Charity.