“Throughout her life she possessed a great passion for sowing the seeds of God’s love through education and example.” 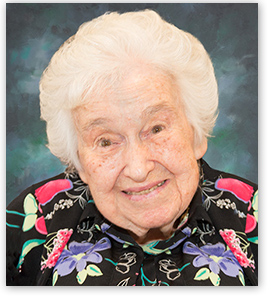 Sister Miriam Helen Callahan (Margaret Mary) was born on January 10, 1917 in Manhattan, one of two daughters and one son of Patrick and Delia Cunneely Callahan. Margaret Mary attended Saint Monica’s School and Cathedral High School. She entered the Sisters of Charity of New York on September 8, 1936. Sister Miriam Helen earned a BA in Latin from the College of Mount Saint Vincent and an MA in Administration from New York University.

Sister Helen was an educator par excellence. Her first mission was to Holy Name School for two years and then she spent the next fifteen years on Staten Island teaching in both Saint Peter’s Elementary and High Schools. In 1955 Sister Helen began teaching Latin at the Academy of Mount Saint Vincent in Tuxedo Park. She had a great impact on the girls in both of these high schools, and many former students kept in contact with her. Those from Tuxedo Park were thrilled to see her in attendance at Academy reunions each year.

She became principal of Saint Joseph Academy in Manhattan from 1961 through 1967, and was then missioned to Incarnation School where she served from 1967 until 1970. Sister Helen’s longest mission experience was at Saint Ignatius Loyola School in Manhattan. Here she served as teacher and principal from 1970 until 1984. When she retired from full-time service in the school, Sister Helen taught Computer Science and Latin, and also helped out with the day-to-day administrative activities. Saint Ignatius School honored Sister Miriam Helen for her many years of service and dedication at a Mass in Saint Ignatius Loyola Church on Sunday, January 5, 2002. The Mass was attended by parishioners as well as many former students and staff members. Previously, in 2000, an education fund in her honor was inaugurated at the Saint Ignatius annual Opera Gala.

Sister Helen’s pleasant demeanor, kindness and understanding caused her to be beloved by many students. In her retirement years at the Convent of Mary the Queen, Sister Helen continued to be involved in services and activities with many people. Throughout her life she possessed a great passion for sowing the seeds of God’s love through education and example. She never missed an opportunity to teach others or to learn from them.

We rejoice with Sister Helen now as she is welcomed into her eternal home by her loving God whom she served so long and so well.as a Sister of Charity. Rest in peace, Sister Helen.