“Sister Maureen is a gifted teacher and administrator of considerable skills, known for her extraordinary energy, deep devotion to the children and parents of Incarnation, and her keen sense of humor. ”  (Incarnation Parish) 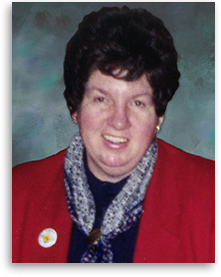 Sister Maureen Dunn (Sister Marita Michael) was born on August 14, 1942 in Manhattan. She and her brother, Michael, were the only children of Edward and Constance Boland Dunn. Maureen attended Saint Frances of Rome School and Saint Barnabas HS before entering the Sisters of Charity on September 8, 1960. She received a BA in English from the College of Mount Saint Vincent, an MA in Reading Specialization, and an MS in Gerontology.

While a second year novice, Sister Michael was diagnosed with a large, inoperable and malignant brain tumor and was given nine months to live. Despite her illness and grim diagnosis, she remained in the Novitiate and pronounced first vows in March 1963. The Congregation prayed to Mother Seton for a miracle and, one year later Sister Michael was still alive, defying all medical explanation.

Sister Maureen began ministry as a secretary at Saint Vincent’s Hospital in Manhattan, and the following September began her long career in elementary education. She taught at Incarnation School, Manhattan, for seven years and subsequently served as Assistant Administrator and Elementary Coordinator for four years. She then taught at Saint Joseph, Yonkers, and Lincoln Hall, in Lincolndale, NY, before returning to Incarnation School for an eight-year term as Principal. For three years Sister Maureen worked at the Sisters of Charity Center as Mission Effectiveness Coordinator. She then became the Administrator of Saint Peter School, Yonkers, where she served for five years. After leaving education, Sister Maureen volunteered her time and talents at the Convent of Mary the Queen. She enjoyed working with older Sisters, and they looked forward to her visits and the activities she would plan. In 2003, Sister Maureen was presented with an award from Incarnation Parish and it was written of her, “Sister Maureen is a gifted teacher and administrator of considerable skills, known for her extraordinary energy, deep devotion to the children and parents of Incarnation, and her keen sense of humor.” Sister Maureen later became a resident at the Convent of Mary the Queen where she lived until 2015 and then moved to Cabrini of Westchester in Dobbs Ferry.

Sister Maureen will be remembered for her compassion and dedication, her love of life, her kindness and—most definitely—her wonderful sense of humor. We rejoice with her as she is welcomed home by the God whom she loved and served so well.