Sister’s ministry is many faceted, but always she is responding to the call and the challenge to Sisters of Charity to be ‘women of healing,’ sensitive to the wounds of persons and to the social evils of our times. 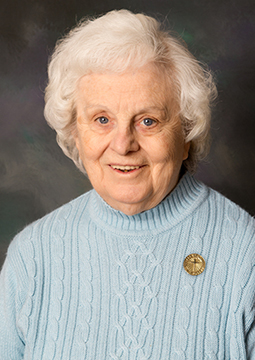 Sister Mary Regina Caulfield was born May 22, 1929, in Bronx, New York, one of two daughters born to John and Bridget McManus Caulfield. Mary Regina attended National School in Ireland and Saint John the Evangelist in Manhattan, Cathedral High School, and worked for a year before entering the Sisters of Charity of New York on September 8, 1949.  Sister Mary Regina earned a BA in English from the College of Mount Saint Vincent and an MA in Theology from Manhattan College, Bronx. She was later granted New York State Certification for teaching English K – 9.

Sister Mary Regina’s fifty-five years of active ministry were devoted to elementary education, parish religious education, and hospital work. She served the first twenty years of ministry as a teacher in almost every grade of elementary education. She taught at three schools in the Bronx: Saints Peter and Paul, Blessed Sacrament, and Saint John Vianney; Elizabeth Seton Academy, Yonkers; and for five years in Nassau, Bahamas, at Saint Francis Xavier and Xavier College. In 1972, she became the Director of Religious Education at Saint John Vianney Parish, Bronx. Sister Mary Regina began thirty “wonderful” years of ministry at Lincoln Hospital, Bronx in 1979. Her devotion to the people of the South Bronx and the mission of Lincoln Hospital to serve those in need led her to serve first as a Patient Advocate, then as Director of Volunteers and Chaplaincy, and finally as the Associate Director of Community and Public Affairs. The impact of Sister Mary Regina’s presence and service at Lincoln Hospital is affirmed by the many awards and citations she received, ranging from the Assembly of the State of New York to the Chancellor of the New York City Public Schools to the nurses who appointed her “Honorary Nurse” at Lincoln Hospital.

Sister Mary Regina retired from active ministry in 2007 and then served in various volunteer capacities. In 2011, she retired at Convent of Mary the Queen, Yonkers, and three years later moved to form a retirement community with her sisters at Kittay Senior Apartments, Bronx.

It is written of Sister Mary Regina, “Sister’s ministry is many faceted, but always she is responding to the call and the challenge to Sisters of Charity to be ‘women of healing,’ sensitive to the wounds of persons and to the social evils of our times.” She enjoyed the companionship of community and had a pleasant smile for those whom she met. Now, as she walks forward into the light of God’s everlasting love, she will be greeted by her family, friends and all Sisters of Charity who have gone before her. Rest in peace, Sister Mary Regina.

To join the video stream of Sister Mary Regina’s Mass of Christian Burial on Friday, September 6, at 10:00 a.m., please click on the link: https://venue.streamspot.com/217aa3db

Archdiocese of The Bahamas