“She was a kind and gentle woman, one who was understanding, compassionate,
quiet and fun-loving.” 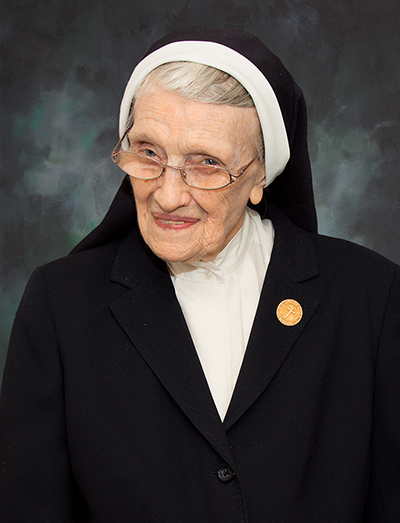 Sister Mary Margaret McGovern (Brigid) was born August 31, 1915, in New York City, one of two daughters and one son of James and Margaret McGovern. Brigid attended All Saints School, All Saints Academy, and the College of Mount Saint Vincent before entering the Sisters of Charity of New York September 8, 1936. Her older sister, Helen (Sr. Virginia Maria, deceased 1997), had entered the Sisters of Charity September 8, 1931. Sister Mary Margaret earned a BA in Math from the College of Mount Saint Vincent, an MA in Secondary Education from Fordham University, and New York State Permanent Certification in Latin.

Sister Mary Margaret’s ministry in education spanned over sixty years, from elementary school through adult education. Her first mission was Saints Peter and Paul School in the Bronx. She was then assigned to Saint John High School in White Plains and, later, Blessed Sacrament High School in Manhattan. From 1960 through 1962, Sister Mary Margaret was the Postulant Mistress for the Sisters of Charity. When she returned to teaching, Sister was assigned to Cardinal Spellman High School, Bronx, where she taught Latin, English, and Religion. She was then missioned to Grace Institute where she spent over thirty years as a teacher, Interim Director and, for the last five years, a volunteer. In 2003, Sister Mary Margaret retired to Mount Saint Vincent Convent where she continued her volunteer services, as well as the ministry of prayer and witness.

Surrounded by generations of nieces and nephews, the Congregation, and friends, Sister Mary Margaret, the beloved “Aunt Bee,” celebrated her 100th birthday on the grounds of Mount Saint Vincent in 2015.

Sister Mary Margaret will long be remembered by all whose lives she touched, whether she met them in or outside the classroom. She was a kind and gentle woman, one who was understanding, compassionate, quiet and fun-loving. She enjoyed and accepted all people as she found them. Sister loved her family and her community. We rejoice with her now as she celebrates her entrance into the eternal presence of our loving God whom she served so long and so well.