“Her bright and cheerful smile was ever present when greeting everyone she met.” 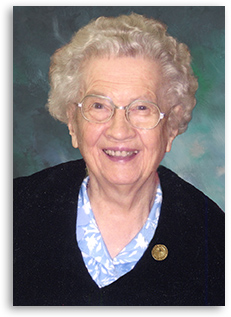 Sister Mary Ellis (Sister Aloysia Maria) was born on August 27, 1918 in Manhattan, one of two children of Edward and Mary Lowry Ellis. Mary attended Saint Ignatius Loyola School, Saint Lawrence Academy, and Grace Institute, all located in Manhattan. She entered the Sisters of Charity of New York on February 2, 1937. Sister Aloysia earned a BA in English from the College of Mount Saint Vincent. She later received her teaching certification and license from New York State.

Most of Sister Mary’s active ministry was in the field of elementary education. She began teaching in Saint Charles Borromeo in Brooklyn for five years. She then went on to teach in Saint Lawrence Academy, Manhattan; Saint Agatha Home, Nanuet; Saint Sylvia, Tivoli; Saint Francis of Assisi, Mount Kisco; Holy Trinity and Our Lady of Good Counsel, both in Manhattan. She later was the librarian for nine years at Elizabeth Seton Academy in Yonkers. Sister Mary also served in various positions at Saint Patrick Villa, Nanuet, and Saint Vincent Hospital in Harrison throughout her years of ministry.

Poor health plagued Sister Mary for many years, but even in her retirement she brought her love of learning and literature to the position of librarian at Mount Saint Vincent Convent. She spent many happy years at the Convent and interacted regularly with the students from the College. Her bright and cheerful smile was ever present when greeting everyone she met. Sister Mary was kind, generous, compassionate, and loving. When asked to share what her life of Charity meant to her, Sister Mary responded, “Charity means love. …Those of us who are retired have all our time to give complete love to Christ through prayer, meditation, and adoration.” When moving to the Convent of Mary the Queen she brought with her that same kind and gentle nature and spent time with the Sisters as she was able. She was among the first group of Sisters to move to Saint Patrick’s Home in the Bronx in 2015.

We rejoice with her now as she meets our loving God whom she served so well as a Sister of Charity for seventy-eight years. Rest in eternal peace and happiness, Sister Mary.