Saint Agatha became “home” for hundreds of young women and men because of Sister Christine’s presence, support and unconditional love… 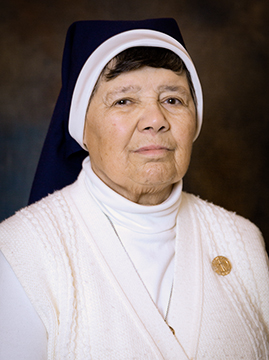 Sister Mary Christine Rogers (Verna Mary) was born May 30, 1930, in the Bronx, one of four children, one daughter and three sons, of Audley and Doris Atkinson Rogers. Verna attended Saint Anselm Elementary School, the Bronx, Cathedral High School, Manhattan, and worked for one year before entering the Sisters of Charity of New York on September 8, 1949. She received a BA in History from the College of Mount Saint Vincent and an MA in Sociology and Behavioral Sciences from the City College of New York. She later received New York State Permanent Certification for Pre-School, Grades 1–6, and a certificate for Youth Ministry Studies.

Sister Christine’s fifty-three years of active ministry were dedicated entirely to youth. She taught in the elementary grades for six years at Saint John the Baptist, Brooklyn, and at Saint Agatha Home, Nanuet, for twelve years. For six years she served the children as “mother” at Saint Joseph Hall, Brooklyn, and for twenty-nine years tended their faith development at Saint Agatha Home, Nanuet, as teacher and Coordinator of the Religious Education Program. In her retirement years, Sister Christine remained at Saint Agatha and stayed in contact with many of the youth she nurtured and loved into adulthood. She helped organize and participated in their “homecoming” events where she heard their many testimonies of affection.

She will be dearly missed by Sister Loretto Thomas Donohue and Sister Robert Marie Fimbel, her loving community at Saint Agatha for all the years she was there. She loved the Congregation, rarely missing a celebration, meeting, liturgy or funeral. She met all with her gracious smile and sincere greeting.

Sister Christine never wavered in her love of the Yankees – there could never be a more devoted fan. She proudly wore their insignia and followed all their games. This past May, on the occasion of her ninetieth birthday, Rockland County’s radio station saluted her, declaring, “God bless you, Sister Mary Christine. Thank you for your 70 years of service as a Sister of Charity. You are indeed ninety and fabulous!”

We rejoice with you now, Sister Mary Christine, as you are welcomed home by your family members, Sisters of Charity and all the saints. Rest in the loving arms of Jesus.